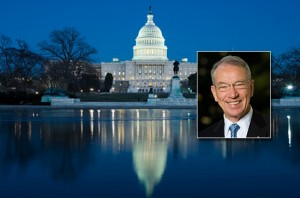 WASHINGTON, D.C. – Often criticized for holding the nominations of federal judges, Senator Charles Grassley said this week that there is actual “good progress” on those nominations.

According to Grassley, the Senate confirmed the 317th judicial nominee during President Obama’s presidency on Monday, so he “wanted to take this opportunity to provide another update to my colleagues and the American people regarding the progress of judicial nominations.”

The following is the rest of his statement:

Furthermore, what I said last month about the judicial vacancy crisis remains true. I’ll repeat the facts: 2015 has the lowest average vacancy rate during President Obama’s presidency, and is among the lowest in the last 25 years. Both the district and circuit courts are over 92 percent filled.

Finally, the Senate Judiciary Committee is moving at the same pace this year that it did under the Democrat control in 2007 during the last two years of President Bush’s presidency. By this point in 2007, the committee had held 10 hearings for a total of 29 nominees (26 judicial nominees and three executive nominees). We have held 10 hearings for a total of 30 nominees (six executive nominees and 24 judicial nominees) including hearings for both the Attorney General and the Deputy Attorney General.

I just wanted to set the record straight and remind all my colleagues that the Senate continues to make good progress on judicial nominations.