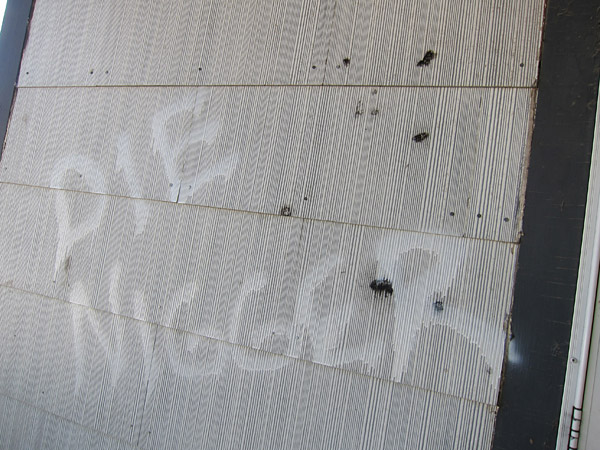 MASON CITY – Vandals struck a home on Mason City’s north side early Monday morning, leaving a barrage of hate-phrases in their wake.

Donya Rhem, who lives at 809 N. Federal Avenue, was awoken at 2 a.m. by Mason City police officers and told about the vandalism. Three racially-charged phases were spray-painted on her home. “I’m scared, and my kids are scared,” she said. Donya lives in the home with her three children. The vandalism can be viewed in the following photos. The images speak for themselves and won’t be re-printed here.

Donya believes the vandalism stems from her recent arrest and the subsequent posting of her photo and address, along with other information, on the popular Facebook page called North Iowa Mugshots.

Donya says she was arrested on a charge of delivery of crack cocaine on June 17th and released July 5th. Once arrested, her police custody photo was published along with her address, as public information, to police reports on the internet. That information was also then published to North Iowa Mugshots. Once posted there, people who follow (“like”) the page can make comments about the person. North Iowa Mugshots only allows people over the age of 18 to browse their page and make comments.

According to Donya, there were nearly 300 comments on her photo and information (this is called a “thread”). She says many of the comments were racially-charged and negative, and that comments she made were mostly deleted.

“North Iowa Mugshots deleted my four comments that I posted when I was released from jail. I said what I had to say, and they deleted the comments.” Donya has made other comments on the thread since then, and those comments all seem to still be posted and not deleted. Some people on the thread have made scores of comments. At this time, there are 265 posts in the thread related to her arrest.

Donya says she thinks the vandalism is a direct result the comments and information posted to North Iowa Mugshots’ Facebook page. She says that along with her address, someone posted that her house is “the one just south of Casey’s.” Donya says the post said, “‘her house is a drug house and it needs to cease.'” She claims the post was made sometime around Saturday and then deleted late Sunday. Then the vandalism happened Monday morning at 2 a.m. That post has been deleted from the thread.

Donya, 46, says she lives in the house with her three children and the eldest son, who is 26, took care of the two younger children while she was in jail. “My grandmother owned this home. I’m buying it from her, she’s now in Michigan. My kids are scared. They wonder if we are safe.”

Donya hasn’t been given a court date yet, she says, on the recent charges of delivery of cocaine. She says people have been driving by all day, some even stopping to ask what happened. Most have been nice, she says. “A few drove by and yelled nasty things. People of color have lived in this house for over 50 years,” she said. “Don’t you think something like this would have happened by now? I blame the mugshots post for this.”

As far as the damage to the home, Donya says “I just need some white paint, exterior, to cover this up.”