BROOKINGS, S.D. – The Panther offense fizzled in the fourth quarter in an 80-69 loss to the South Dakota State Jackrabbits on Saturday evening.

BROOKINGS, S.D. – The Panther offense fizzled in the fourth quarter in an 80-69 loss to the South Dakota State Jackrabbits on Saturday evening.

UNI played a tale of two halves at Frost Arena. It was a low-scoring and defensive-minded first half but in the second half, both teams found their shooting. The Panthers shined in the third quarter going 8-15 from the floor and 4-9 from three-point range. But only 33% scoring in the fourth would end UNI’s night against the Jackrabbits.

“We had a good game, I thought we battled for 36 minutes,” said Head Coach Tanya Warren. “I thought it was anyone’s game. But I thought fatigue got us the last four minutes. But I really liked how we defended the first half. And then they made an adjustment to feed it from the middle of the floor. And it’s a little harder to trap from the middle of the floor. So, we kind of had to mix up our rotations. But it’s a good learning lesson for us. We battled and went toe to toe. I liked our fight, we just couldn’t finish.”

It was all defense for UNI in the early going of the game. But the Panthers would put runs together throughout the quarter to take the lead twice. UNI would have their largest lead of the game at seven points with 2:30 left in the first thanks to an Emerson Green layup. SDSU would end the quarter on a 7-2 run to cut the Panther lead to a basket.

The teams would trade shots for most of the second quarter giving the lead back and forth. The Jackrabbits regained the lead on a six-point run with three and a half minutes left in the half. UNI would have two three-pointers in the final two minutes from guard Maya McDermott and center Cynthia Wolf. The Panthers would enter the half down by just one.

Scoring would start early in the second half as guard Kam Finley hit a three-point jumper off a turnover in the first 40 seconds. Both teams would find points around the floor, tying three times in the first four minutes. UNI would regain the lead for most of the third on a Wolf trey at 5:07.

Two more threes for the Panthers would put them back up by seven with four minutes left in the third. SDSU chipped away at the UNI lead over the next two minutes bringing it down to just one. The Panthers would get two more baskets back but would head into the final frame tied 51-51.

UNI kept the offense going to start the fourth with a Grace Boffeli layup. The Jackrabbits would put up a 5-0 run to go back on top. But they were quieted by a Green trey on the side that tied the game up. Two free throws from Boffeli gave the Panthers a slim two-point lead.

The teams began to trade baskets again with UNI having their last lead with five minutes to go. McDermott took a layup off a turnover to put the Panthers up by one. But SDSU would end the game on an 18-7 run to give UNI the 80-69 loss.

The Panthers scored a third of their points in the paint while going 23-59 (39.0%) from the floor. UNI led the game in steals with six while also making six blocks. The Panthers also grabbed 10 treys, their fourth game of the year with at least 10 three-pointers.

Three UNI players ended the game in double-figures with Green leading the way at 17. Boffeli and McDermott also made the 10+ mark with 15 and 14 points respectively. Wolf and Laube led the team in rebounds with five apiece while forward Ryley Goebel had three steals on the night.

UP NEXT:
UNI returns home for their final home game of 2022 against the North Dakota State Bison. The Bison are currently 6-2 and are on a two-game losing skid to a pair of Michigan teams. 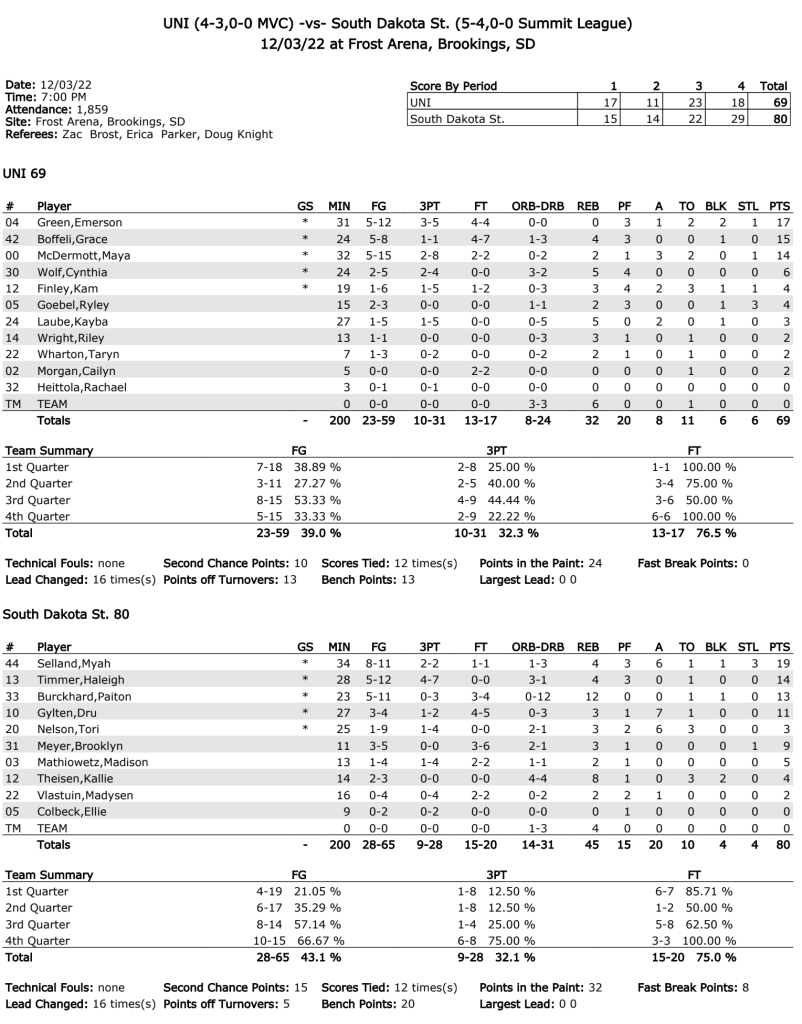