A foul-filled first half saw the Cyclones have to navigate multiple different lineups as they fell behind by double figures. ISU was able to have a burst at the start of the second half to get within five points, but were unable to overcome a quiet night from behind the arc (3-of-13 from 3-point range) and a -29 rebounding deficit.

In defeat, Iowa State was led by 14 points form Osun Osunniyi, who was joined in double figures by Tamin Lipsey (12) and Jaren Holmes (11).

How It Happened
Foul trouble became a challenge for the Cyclones in the first half, as ISU saw five of the nine players they played in the first 20 minutes pick up two fouls, while Caleb Grill, Jaren Holmes and Aljaž Kunc all got three fouls. Osun Osunniyi got five of ISU’s first seven to push the Cyclones ahead 7-3, but the Huskies went on an 8-0 run to build up a 11-7 advantage.

The Cyclones went over five minutes without a field goal as the Huskies built their lead into double figures at 23-13 with a Donovan Clingan lay-in. The Cyclones made a late rally to get within single digits in the final minute of the period, but UConn’s Hassan Diarra hit a 3-pointer at the buzzer to restore the lead to double figures.

Lipsey got consecutive baskets early in the second to get Iowa State within six at 40-34 but the Huskies eventually worked their way back ahead by a dozen at 48-36. The Cyclones kept working hard on defense and the offense eventually followed, with a 7-0 run getting the Cyclones back within five 50-45.

However, five was a close as the Cyclones would be able to get it, as the Huskies went on an 11-2 run that saw Iowa State go 1-for-5 from the field in addition to committing three turnovers across the five minutes of game action. The Huskies built up a lead of as many as 18 points in the second period as they claimed the Phil Knight Invitational title.

Player of the Game
Tamin Lipsey continued his strong start to his freshman campaign with a career-high 12 points, which he got on 6-of-9 shooting. He also recorded three assists, two rebounds and two steals.

Up Next
Iowa State returns to Hilton Coliseum on Wednesday to host North Dakota. Tip between the Cyclones and Fighting Hawks will be at 7 p.m. on Big 12 Now. Tickets can be bought through the Iowa State Athletics Department. 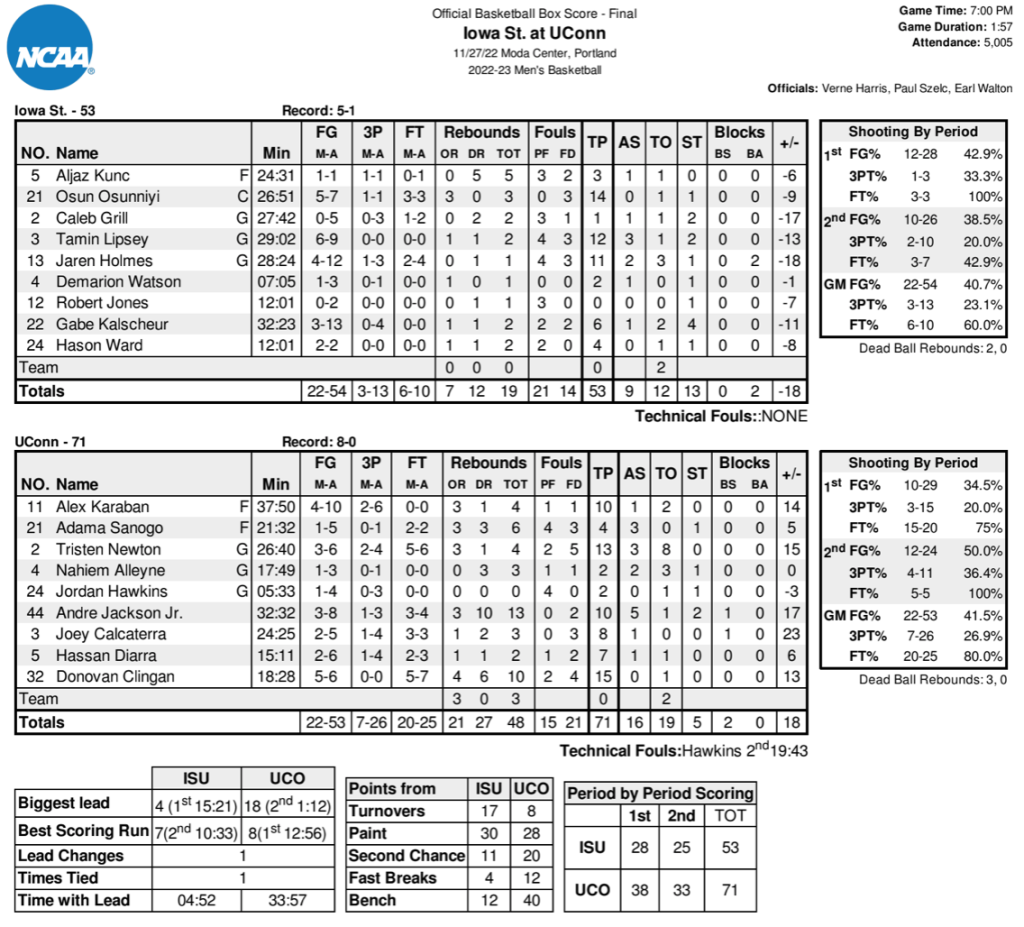