CEDAR FALLS – It wasn’t pretty, but the Panthers pulled off the win against St. Thomas 58-46 on Monday evening.

It took a defensive fourth quarter for UNI to get their first win of the season when they played the St. Thomas Tommies in its home opener. Points in the paint would separate the Panthers from St. Thomas as over half of UNI’s scoring came from the lane and under the basket.

“Anytime you can come away with a W, that’s a good thing,” said Head Coach Tanya Warren. “I thought we played a little nervous the first two quarters. And we really challenged them at halftime of digging in and defending. You can’t always determine where the balls going to go in the hole a lot. And we held them to nine points in the fourth quarter and I thought we did a terrific job of just being able to stay in when things weren’t going our way.

“I think what people have to understand is, yes we have a lot of kids back but we have a lot of kids in different roles than they’ve been in. So they’re going to have to settle in. We didn’t shoot free throws the way we normally shoot free throws and that’s okay. That’s fixable. We’ll watch film, we’ll get back to work, and I’m very proud of what this team was able to accomplish tonight.”

The Panthers would get an early lead but it didn’t last long as St. Thomas countered consistently. UNI started to pull away at the end of the first quarter, going on a six-point run to head into the second up 15-9. The Panthers would keep the lead well into the second, getting contributions from starters and bench players alike. But the Tommies wouldn’t go down without a fight, putting together an 8-2 run to end the half.

St. Thomas grabbed its only lead going into the third quarter as they went up by three points after a minute and a half. UNI would quickly counter with an eight-point run, punctuated by back-to-back threes from center Cynthia Wolf and forward Grace Boffeli. The Tommies would get the game close again, tying it up in the final minute. But a layup from guard Riley Wright and a free throw from guard Kam Finley gave the Panthers a three-point lead.

UNI would control the final frame, keeping St. Thomas to just nine points. The Panthers had two separate runs in the quarter and were able to grab a double-digit lead in the final minute and a half. Four straight made free throws ended the game for UNI as they won 58-46, pulling away with the win.

Boffeli and Finley carried the scoring for the Panthers with 37 points combined. Boffeli also picked up her first double-double of the season with 19 points and 10 rebounds. Finley also led the team in steals and free throw percentage, with five takeaways from the Tommies and being 75% at the line.

UP NEXT:
UNI gets the rest of the week off as they welcome the St. Louis Billikens to town. The Sunday matinee game tipoff at 2 p.m. from the McLeod Center in Cedar Falls. 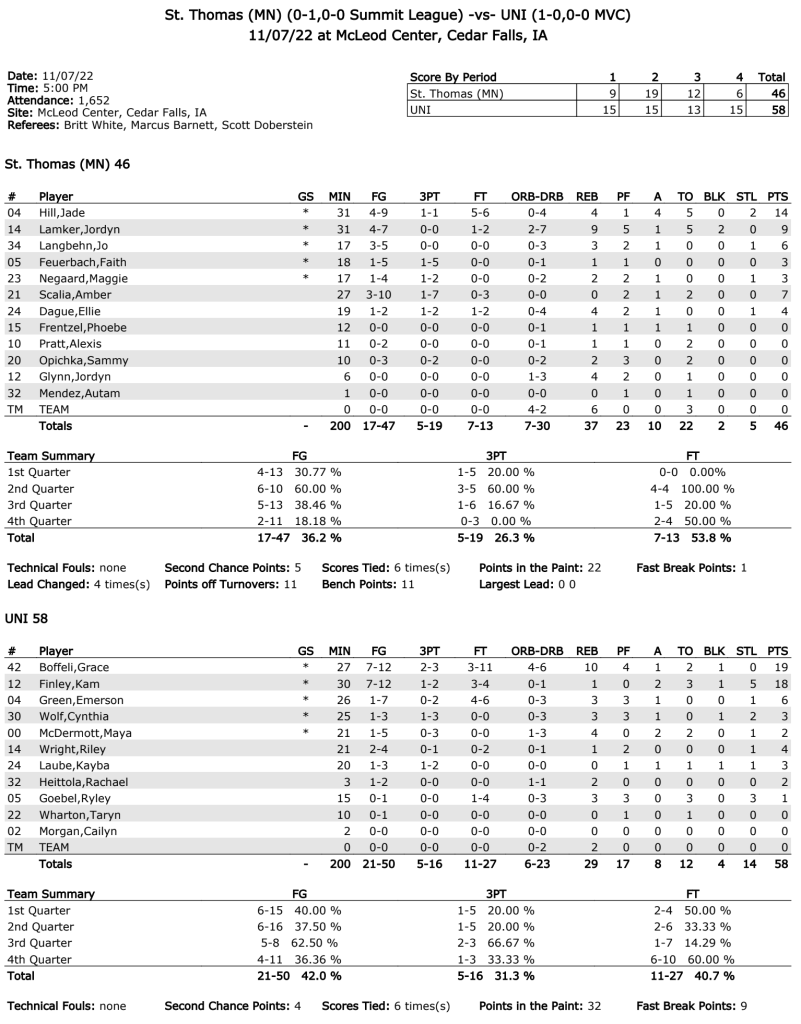