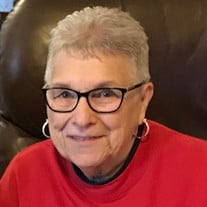 Beverly Goodchild, age 85 of Mallard, passed away on Monday, October 3, 2022 at the West Bend Health and Rehabilitation Center.

Beverly Goodchild, age 85 of Mallard, passed away on Monday, October 3, 2022 at the West Bend Health and Rehabilitation Center. Funeral Services will be 10:30 AM on Monday at the Mallard United Methodist Church. Burial will take place at Washington Cemetery in Havelock. Visitation will be 4:00-6:00 PM Sunday at the Mallard United Methodist Church. Services will be live streamed on Lentz Funeral Home’s website: https://www.hdezwebcast.com/show/beverly-goodchild.

Beverly Jean Hynes was born on August 14th, 1937 to Francis and Alice Hynes. She was born and raised in the Curlew area. Bev attended and graduated from the Curlew School.

Bev married Ghervus Goodchild on July 27th, 1956 and they made their home on a farm just north of Mallard where they raised their 6 boys – Koy, Klint, Kent, Kal, Klay, and Kip.

Bev worked at the Emmetsburg Hospital for a number of years but her most important job was being a wife and mother. She was happiest when surrounded by her large family and it was not uncommon for her to make holiday meals for 50 people or more. Bev loved golfing, gardening, and reading and was an excellent cook and baker. Her granddaughters were always asking her about her “secret” recipes and asking for tips from her. Bev was an avid sports fan for all her kids and grandkids and it was no secret she knew more about football than dad. Spending time with family was what was most important to her.