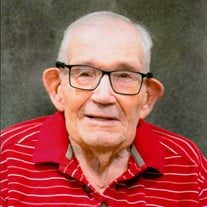 Visitation will be held one hour prior to the funeral service at Good Shepherd Healthcare Center from 9:30am to 10:30am on Monday, August 22, 2022.

Wes was born on March 12, 1928, the son of Walter and Gladys (Messenger) Dahl of Manly, IA. He graduated from Manly High School’s Class of 1945. On April 17, 1949, Wes married Violet Myre in Kensett, IA. Together the couple had four children. Wes spent 39 years of his life in the soft drink business, the majority of which were spent working for Pepsi Cola, retiring in 1993.

In his free time, he enjoyed spending time with family and friends. Wes often went camping and traveling with Violet. Every year for 22 years the couple would go on vacation with Violet’s twin sister, Viola, and her husband Pete Lonergan. He also liked completing crossword puzzles, playing cards, and dominoes.