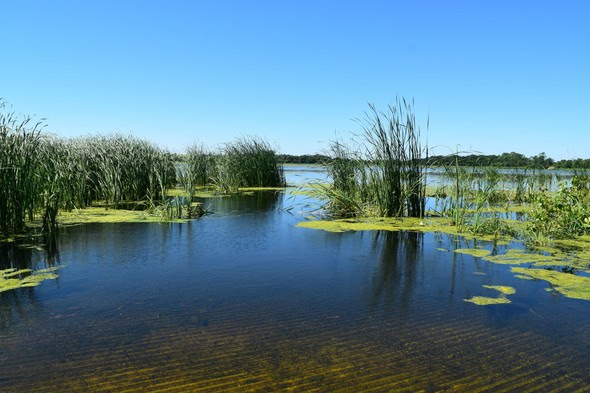 The centerpiece of the area is the 371-acre Little Swan Lake that is experiencing its best water quality in more than a generation due to a restoration project combined with a well-timed drought.

The project was initiated in 2015 after the old weir was failing. “While the project was initiated to fix the weir, we saw an opportunity to reach out to the private landowners and our conservation partners to explore, cooperatively, renovating the lake,” said Chris LaRue, wildlife biologist with the Iowa Department of Natural Resources.

Work began in 2016, but several consecutive wet years limited the progress. The water level in the lake was held low and combined with the back to back drought years of 2020 and 2021, the vegetation finally got established to move the lake into a clear water state.

“We kept the water level down trying to get the aquatic plants established then Mother Nature helped out with the drought and we got it done,” LaRue said. “It was hard to envision Little Swan Lake with clear water. This is the first time in my career (1996) that you can see the lake bottom and significant water quality improvements. This is a pretty big deal.”

Little Swan Lake outlets into a marsh, then the 90-acre Christopherson Slough, then flows north into Minnesota before entering the West Fork of the Des Moines River. To maintain the water quality, it was necessary to protect the aquatic plants, so the project included a large rock fish barrier with tube system to prevent common carp from entering the lake. Common carp are a fish species that uproot aquatic plants and stir nutrients from the lake sediment leading to poor water quality.

After the lake renovation, it was restocked with yellow perch, northern pike, and other native species in coordination with Mike Hawkins, district fisheries biologist.

The complex had supported migratory birds and served as a critical stopover during the migration, but use had declined significantly due to poor water quality and habitat. After the renovation, waterfowl and nongame birds returned, and the area is home to three nesting pairs of trumpeter swans. Last year, Little Swan hosted more than 50 swans during the migration which brought a lot of attention to the lake.

LaRue said a big reason that the project came together was the internal coordination between the Iowa Lake Restoration Program and local staff from the Fisheries and Wildlife Bureaus, and participation from the neighboring landowners.

“This restoration could not have been possible without all of the partners,” LaRue said. “This was a team effort made possible by Ducks Unlimited, the Dickinson County Water Quality Commission, the Iowa Department of Agriculture and Land Stewardship, Natural Resources Conservation Service, private donors, our staff and funding from the North American Wetland Conservation Act and Iowa Lake Restoration Program.”

And the work isn’t done.

LaRue is planning additional bank stabilization improvements in select areas on the state shoreline in the future with targeted tree removal to emphasize the oaks and to enhance sunlight on the slopes for other grasses and critical vegetation.

Other plans include future timber improvement at Christopherson Slough through buckthorn removal, which will allow sunlight to hit the ground and favor oaks and oak regeneration.

Crews from the Multiple Species Inventory and Monitoring program in the Iowa DNR’s Wildlife Diversity Program have surveyed the complex, most recently in 2021, recording the different wildlife species that calls the area home.

It has documented a number of species considered threatened or in need of conservation including the state threatened Henslow’s sparrow, and state endangered northern harrier. The Poweshiek skipperling and black terns have been confirmed at the complex, along with Blanchard’s cricket frog, bobolink, broad-winged hawk and bald eagles.

“It has it all from a wildlife perspective. Waterfowl, deer, pheasants, grassland birds, butterflies in the prairie and amphibians and reptiles,” LaRue said.

Remnant prairie has been found on the dry ridges on the eastern portion of the complex and has unique rolling hill topography versus flatter landscape in pothole area. Sage, butterfly milkweed, yarrow, gray-headed coneflower, wild bergamot, and leadplant are visible.

Some less common plants on the complex include shining willow, wild rice and the federally threatened prairie bush clover.

LaRue said they used prescribed fires on three different prairie sections this season to keep the brush down and to improve the habitat. He said they also use targeted and limited grazing management and work with a tenant who conducts some of the management activities, including installing food plots and noxious weed control.

(PHOTO: Restoration work began in 2016, and while the water level in the lake was held low, it wasn’t until the back to back drought years of 2020 and 2021, that vegetation finally got established to move the lake into a clear water state. Photo courtesy of the Iowa DNR.)