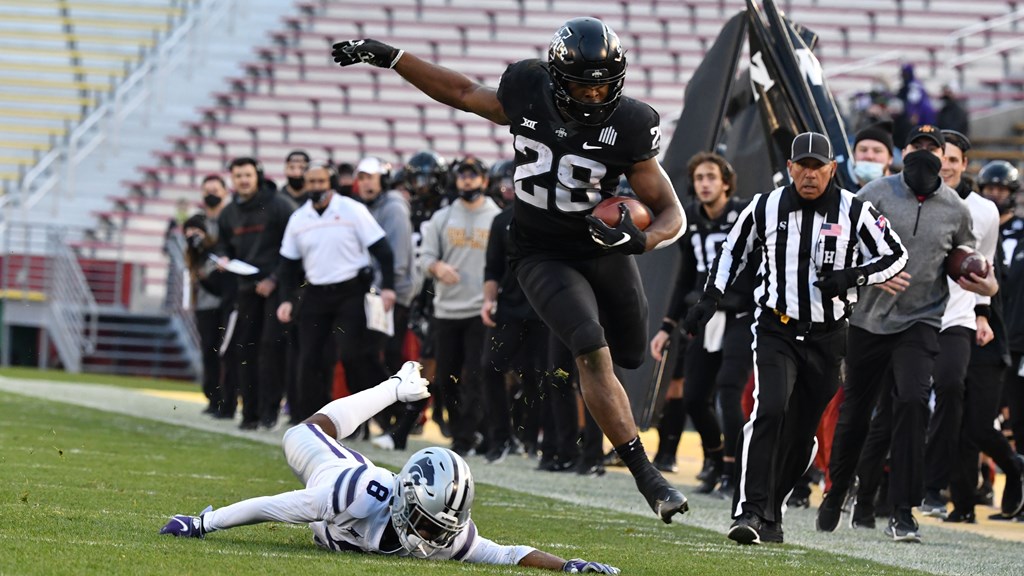 AMES – Iowa State football player Breece Hall, Big 12 Offensive Player of the year, a consensus All-American in 2021 and one of the best running backs in school history, has been named the Breece Hall
cyclones.com[/caption].

He finished his junior season with 1,472 rushing yards while tying his own ISU season records in scoring (138) and touchdowns (23), which ranked second nationally in both categories. The Doak Walker Award finalist completed his career owning or sharing 11 school records.

Hall, who for the second time in his career finished among the top 10 for the Heisman Trophy, displayed an unbelievable knack for finding the end zone. He rushed for a touchdown in his final 24 games as a Cyclone to break the NCAA all-time record for consecutive games with a score on the ground.

He led the Big 12 Conference and was sixth in the nation in rushing yards per game (122.7), while topping the league and ranking fourth nationally in rushing touchdowns with 20.

A threat out of the backfield, Hall caught 36 passes for 302 yards and three touchdowns, tying for the second-most receptions by a running back in ISU history.

He saved the best for last, posting a record-setting day against TCU in his final game as a Cyclone. Against the Horned Frogs, Hall established career highs in yards from scrimmage (281), rushing yards (242), touchdowns (4) and rushing touchdowns (3) to earn Big 12 Offensive Player of the Week accolades for the sixth time in his career.

It did not matter who the Cyclones were facing, Hall was like a player in a video game. He made opponents miss at an incredible rate. Since 2019, Hall forced 194 missed tackles, the most in college football in that time.

Hall announced his intentions to forgo his senior season in December and was selected by the New York Jets with the 36th pick in the 2022 NFL Draft, the highest Cyclone drafted since 2012.

Hall is second on ISU’s career list in rushing yards (3,941), 100-yard rushing games (20) and yards per career (5.48). His big-play ability consistently had Cyclone fans on their feet, matching the school record with 10 50-yard plays from scrimmage.

He had 800 career touches and lost just three fumbles in his career.

He was the definition of consistency and reliability.

Hall will be recognized at a football game this fall.