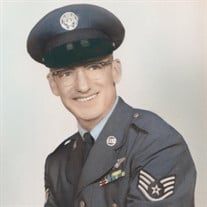 A Memorial Service and Visitation will be held in the near future at Hogan-Bremer-Moore Colonial Chapel.

Larry was born on August 20, 1937, the son of William and Selma (Findling) Reynolds of Nashua, IA. He was a graduate of Mason City High School. In 1958 Larry married Marjorie Koester. He served our country during the Vietnam War in the Air Force. Larry was honorably discharged as a flight engineer in November of 1975. He then moved to Mason City and became an Insurance Adjuster at Demay Adjustment, he worked there until his retirement in 1990.

One of his greatest accomplishments was being able to be the pilot for Air Force One, flying president Kennedy and Nixon.

One of his most memorial moments is flying President Kennedy in his aircraft while Airforce One was used as a decoy.

In his free time he enjoyed being a member of the VFW, Freedom Bike Rides, Bowling Hall of Fame, and Antique Car Club. He was a part of the Mason City Gun Club.

Larry is preceded in death by his grandson, Brennen Reynolds, as well as his parents.