This news story was published on January 4, 2022.
Advertise on NIT • Subscribe to NIT 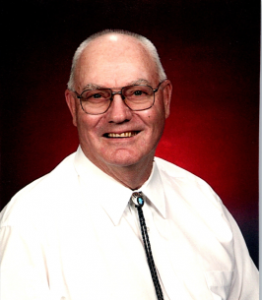 Earl Leroy Joachims the son of Charlie and Beulah (Lambertson) Joachims was born October 12, 1930 on a farm near Laurens, Iowa. He died on Wednesday, December 22, 2021 at the Good Samaritan Society in Estherville, Iowa at the age of 91.

Leroy received his education and graduated from Pocahontas High School in 1949. He served in the United States Marines during the Korean Conflict, where he met his lifelong friend, Dr. Roger King. He was honorably discharged in 1954.

On February 8, 1952 he was united in marriage to his high school sweetheart, Doris Carlson, at the United Methodist Church in Pocahontas. Leroy worked for the Pocahontas school system from 1954 until 1971.

In 1973, the couple moved to Estherville. He then worked for the Estherville school system until 1977 and then started his own business, Joachims Construction & Insulation. Leroy enjoyed refereeing for basketball and football, bowling, playing cards and wintering in Arizona from 1980 until 1993. Doris passed away in 2003.

He was a member of the United Methodist Church, VFW and American Legion.

He has been preceded in death by his parents, wife, and daughter, Patti Yackle and a brother, Glen Joachims.