This news story was published on September 5, 2021.
Advertise on NIT • Subscribe to NIT

Phillip Benito Cuevas was pronounced dead, due to complications related to COVID-19 and multiple preexisting medical conditions, at 1:58 a.m. on Saturday, September 4, 2021 in Hospice Care at the Iowa State Penitentiary. Cuevas was 81 years old at the time of his death.

Cuevas had been serving a life sentence for Murder-1st Degree (690.2) from Polk County. His sentence began on February 25, 1977. According to court documents, Phillip Benito Cuevas was convicted by a jury of murder in the first degree and he was sentenced to imprisonment for life. The charge arose out of the brutal slaying of William Turk, which occurred in Des Moines on October 5, 1977. The victim’s body was discovered on October 6, in the late afternoon. When found, Turk’s hands and feet were bound behind his back. He was gagged and lying face down in a pool of blood. He had sustained nine stab wounds in the chest and back and a crushing skull fracture. A sixteen centimeter knife blade, with the handle broken off, was embedded about half its length into the middle of his back. The medical examiner attributed the cause of death to massive cranial trauma. On December 1, 1977, by County Attorney’s Information, defendant, his wife Mary Ellis Cuevas and Albert Leo Galvan were charged with the crime. 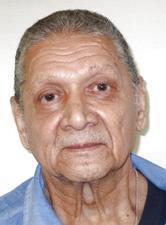