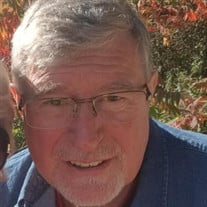 Robert J. Crooks, 71 of Mason City, went to his new home in Heaven at 1:59 a.m. on May 17, 2021, by way of hemorrhagic pancreatitis while hospitalized at MercyOne North Iowa Medical Center in Mason City.

Funeral services will be held at 2:00 p.m. Friday, May 21, 2021, at Hogan-Bremer-Moore Colonial Chapel, 126 3rd St. NE, Mason City, with Rev. Joseph Brown officiating. Burial will be at Memorial Park Cemetery in Mason City.

Bob’s Earthly life began on June 20, 1949, born to Gladys and Wilbur Crooks, Dougherty, IA. After graduation from Sheffield High School in 1967, he lived and worked in Charles City and started his family with daughter, Sara and son, William. Bob’s spiritual life began in 1972 when he received Jesus as his personal savior and was quickly named preacher man as he excitedly shared the gospel with others and continued throughout his life, but certainly not without some detours and challenges along the way.

In 1975, Bob met Sue (Bradley Mead) and three years later married her, and her children, Jason and Niki Mead. Bob was a fun-loving dad who chased the kids for hours in the big yellow house as they called it, hide and seek, throwing the ball into the night hours, fishing, hunting, and camping with lots of pets as they loved living on the acreages too. Special times in his life included: when he had a bus ministry, picking up children for Sunday School and church, sharing the gospel and joining in the fun with costumes of western cowboys to clowns to Uncle Sam, just being Bob providing the world’s largest banana split to feed 40, and when the kids would throw pies at Brother Bob if they met their goal that week.

Bob loved surprising his wife in many ways such as: cruising, tour bus trips, traveling to Alaska and Florida and even a simple candlelight dinner for two at home. Besides his family and beloved dog, Abbey, he adored using God’s beautiful flowers around his home and the water lily pond. He so appreciated the comments and smiles from all the neighborhood walkers. Bob often said according to the world…. I’m not much, I never came from much, but God freely gave me much which I’m eternally grateful.

After his years with hog farming, Bissonnette Chevrolet, selling Tony’s pizza and Farm Bureau insurance, and 25 years at Eatons in Belmond, Bob thoroughly loved his years of retirement of simple times, the best of times with his soulmate, from simple walks, lunch in the parks, to Alabama or Florida in the winter time. The last year was a bit challenging for Bob, as with everyone, because of surgeries and recovering, but he remained close to Jesus for his strengths and hope. His favorite song “What a Day That Will Be” happened on May 17, when Bob saw Jesus in person (he spoke of that so often) along with son Jason, and other loved ones and hoped to have a lengthy conversation with Apostle Paul!

He was preceded in death by his parents, and siblings Loretta, Lloyd, Joe, Barb.