This news story was published on June 29, 2020.
Advertise on NIT • Subscribe to NIT 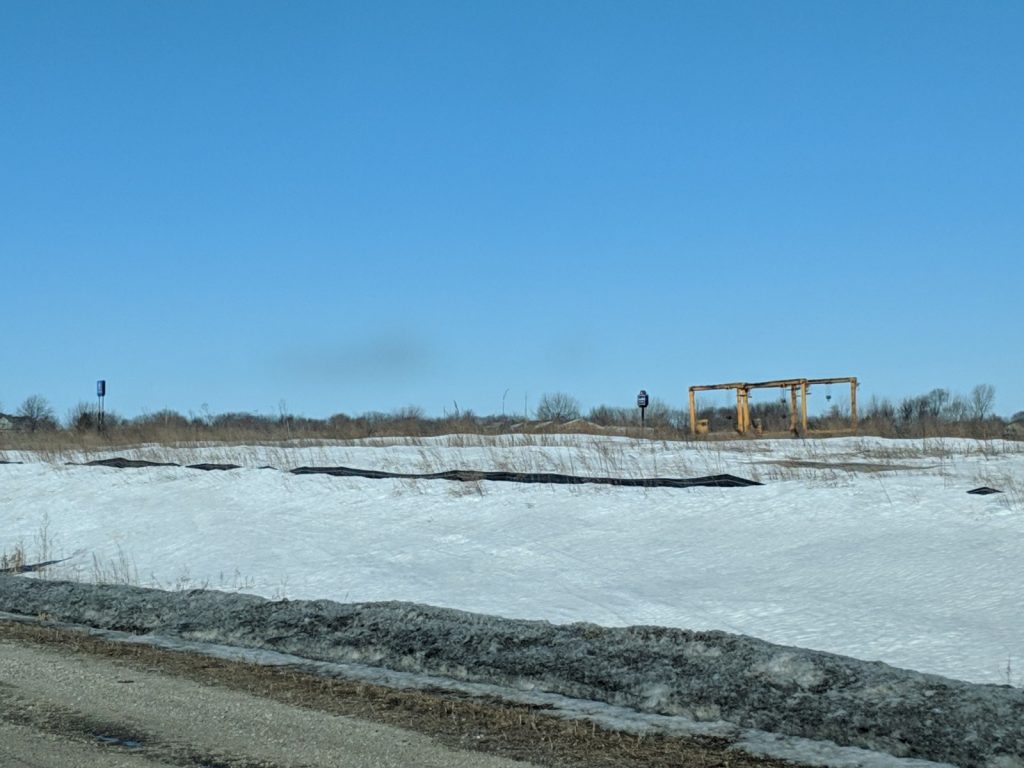 Location for hotel and convention center in Clear Lake. Land between 32nd Street, I-35, and north of Highway 122.  The area has undergone major preparations over previous months to reach groundbreaking status.

CLEAR LAKE – Ground was broken today in Clear Lake for a new Marriott hotel and conference center on the east edge of town.

Chad Schreck, President and CEO of North Iowa Corridor Economic Development Corp., expects the development will have “a catalytic impact” on this region.

“When we were going through the process of setting goals for Vision North Iowa, it was a common theme among participants: to improve entryways into both Mason City and Clear Lake. It’s exciting to see how much has been done on that already,” said Schreck.

Located at the intersection of Interstate 35 and Highway 122, where thousands of motorists enter Clear Lake, the site was the location of Andrews Prestressed Concrete for many years. After the plant closed, the industrial structures stood vacant a long time. “We had the fear that it would be like that forever, that no one wanted to buy it and clean up the property,” he said. Then Lorri and Todd Hall of Sheffield purchased the 64-acre site.

“A lot of credit goes to the Halls,” Schreck said. “We worked with city
administrators identifying it as a priority. When Halls got control of the property, we went to work on removal and worked with City of Clear Lake to get streets improved. It’s been a great move by Clear Lake City Council and staff to make it more attractive to developers.”

Old Dominion Freight Line plans to build a service center on a north section of the property. Then on October 21, 2019, Clear Lake City Council approved a development agreement with WillowStream LLC to build a hotel, conference center, and restaurant on about 6 acres at the site.

“There’s a multiplier benefit,” Schreck said. “We’re removing an eyesore. The improved look and feel, to have that for a community, is huge. It’s opened the door for the next developments, to attract more people into the community and region.”

The proposed hotel, restaurant, and conference/event/meeting center is an important project for the community, according to Flory. He added, “A new lodging
establishment has not been built in Clear Lake since the late 1990s and
Clear Lake currently lacks significant meeting center space and facilities
adequate to host events and conferences at a higher level.”

Flory said the City of Clear Lake is optimistic for a fall 2019 groundbreaking on that potential project.

Schreck said North Iowa Corridor and both communities are working together to make the proposed development complementary to the latest Mason City downtown projects and the Surf Ballroom.

“It’s an exciting opportunity, with the access from the interstate and with the regional impact it can have,” he said. “Developers don’t put their money anywhere they aren’t going to see a return. This will be good for us all.”

Meanwhile, farther east in Mason City, officials struggle to break ground on a hotel and convention center in the downtown, which includes a skywalk to Music Man Square.  Gatehouse is the developer.  No ground has been broken on the project, but plans are allegedly in place to proceed at an unknown date.  The hotel, being planned for years, is the nexus of a state program the City touted that would route up to $10 million in collected state taxes within new developments inside a downtown reinvestment district back to the City to offset millions of dollars in bonds the City is selling to pay for downtown redevelopment.  Read more about the project, here.

The City has been mired in a lawsuit brought by Philip Chodur’s G8 Development, the previous chosen developer for the hotel project.  G8 sued when the City fired G8 and went back to Gatehouse as the chosen developer. Records show the case is bogged down in court with a pre-trial conference set for February 5, 2021 and a jury trial set for February 15, 2021.  The amount of damages G8 is seeking isn’t clear.