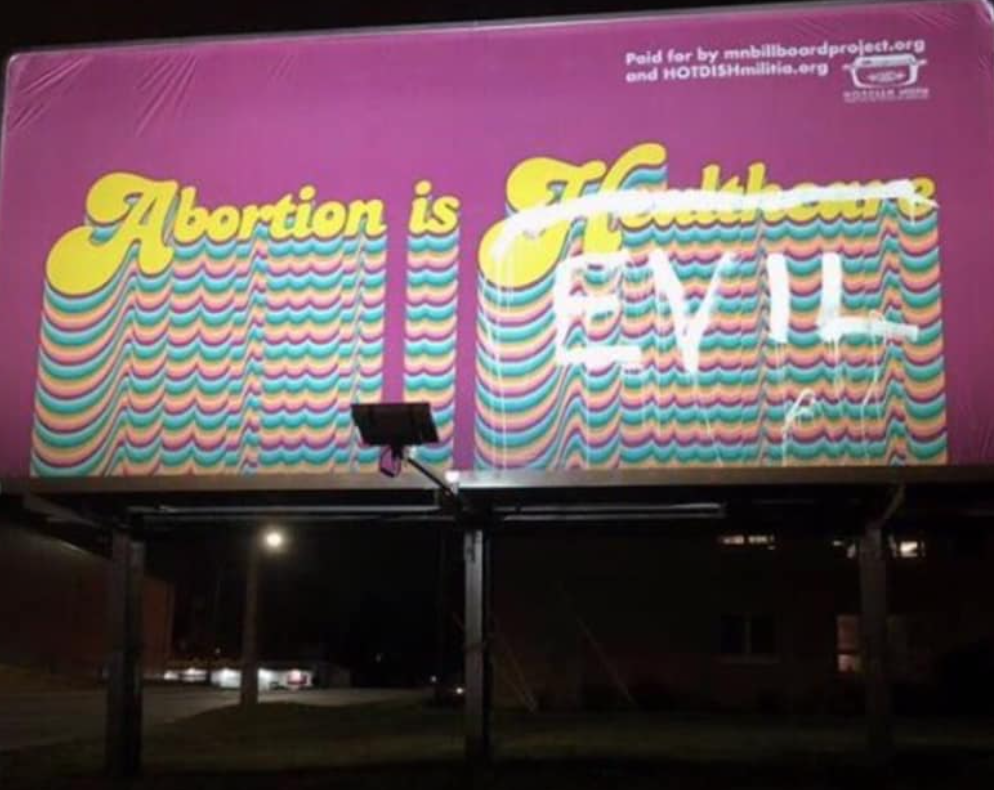 ST. PAUL, MINNESOTA – Vandals attacked a pro-choice billboard this weekend in Minnesota that was purchased by a project founded by a Mason City native.

Kristin Brietzke was born and raised in Mason City before re-locating to Minnesota in 2010. She founded and runs a grassroots pro-choice art collective with her partner, Kelly Searle. According to Ms. Brietzke, the pair “noticed a bunch of anti-choice billboards popping up in our current city of St. Paul.” As a part of their art collective, Brietzke and Searle created the Minnesota Billboard Project, promoting pro-choice values on billboards. They “decided we wanted to create some showing the other side (of the abortion issue). 70%+ of Minnesotans are pro-choice, we are the silent majority.”

“We had a contest for local artists where they could submit designs, Brietzke explained. “The top ten were uploaded to social media and people could like the images of their favorite designs. The likes were added to an executive panel and the top 5 were awarded billboard space in St. Paul during the Minnesota state fair.”

One of their billboards was displayed in Duluth. The bright purple billboard displayed fancy yellow font with the phrase “Abortion is Healthcare”. At some point on November 18, a vandal got in front of the billboard and apparently used white paint to draw a line through “Healthcare” and write the word “EVIL” in its place.

After the blatant act of vandalism, Brietzke said, “Luckily this location is near several security cameras. We will find the jerks that did this!  A strong majority of Minnesotans agree that the government should not interfere with personal medical decisions.

“We are fundraising to get more designs up in the area & replace the defaced image.”

To support the Minnesota Billboard Project, donations can be directed to www.gofundme.com/f/MN-Billboard-Project-Duluth/.