The class includes three players that received three-star rankings and exhibit the qualities of the players that have helped make Iowa State successful over the years.

Anderson earned second-team all-state accolades in Florida’s class 8A, the largest class in the state. He was regional and county player of the year. Anderson was a three-star recruit by both 247sports and Rivals and the 17th-best player in the state of Florida. 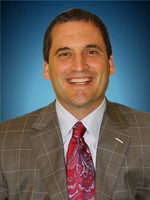 “Everybody wants skill these days and that’s what we really tried to address in the frontcourt,” Prohm said. “If you talk to Luke, he doesn’t really want to be given a position. He’s a four with great skill, great size. He can really stretch the defense, he can make threes, play in pick and roll, can drive guys and score around the basket.

“Luke is really versatile, really skilled, but the biggest thing is he can really space the floor.”

Tre Jackson, a 6-1, 170-pound guard, was someone that the Cyclone coaching staff locked in on this summer and made a priority.

“The more I watched Tre this summer, the more I loved his competitiveness,” Prohm said. “He played on a smaller AAU organization, but his teams won. They beat the bigger names. He brings a toughness, he brings an energy to his team. His ability to play both guard positions is huge and he can really shoot the basketball.

“He’s a tough kid and I’m really looking forward to getting him into our program because he checks all the boxes from an intangibles standpoint.”

Jackson preps at Blythewood High School in Blythewood, South Carolina. He averaged 20 points, five assists and four rebounds for the Bengals, who have won region championships the last two seasons. Jackson is a 1,000-point scorer and an all-state and all-region honoree.

Jackson is a three-star recruit by both Rivals and 247sports. He is ranked as the eighth-best recruit in South Carolina.

Loyalty was the driving factor in Iowa State landing Marcedus Leech Jr. (mar-SEE-dus), a high-upside guard from Jonesboro, Arkansas. The 6-5, 170-pound athlete suffered a serious leg injury as one of the nation’s highly-ranked recruits. Iowa State’s coaching staff stayed true to Leech and he later rewarded them with his commitment.

Leech, who had offers from the likes of Kansas, Miami, LSU and Washington prior to his injury, has recovered from his injuries and is returning to form.

“This is one of those great recruiting success stories that I hope in a couple years we are sitting here talking about,” Prohm said. “He was a really heralded recruit, got injured and everybody kind of fell off of him. We kind of stayed the course with him and he showed some loyalty back to us. He’s healthy now and once we get him on campus we get some weight on him and continue to monitor that leg he’s got huge upside because of his athleticism, his ability to score off the dribble and his ability to make shots.

“His ceiling is really high and I think a couple of years down the road everybody could say, ‘Man, where did this guy come from?”

As a freshman at Poplar Bluff High School in Missouri, Leech averaged 26.7 points per game, leading his conference in scoring. Leech broke the single-season 3-point record and was a freshman All-American. That summer, Leech was named MVP at a number of the nation’s top camps prior to suffering his leg injury.