Makenzie Meyer, a former Mason City Mohawk standout, scored 13 points and added 3 rebounds and 3 assists. She made all 5 of her free throws and is shooting 90.2% for the season. 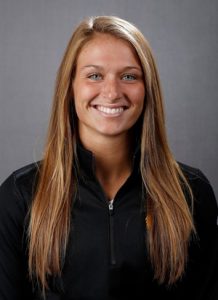 Three other Hawkeyes scored in double figures. They include: Megan Gustafson (36), Chase Coley (12), and Hannah Stewart (10). Junior Megan Gustafson registered her 26th double-double of the season with 36 points and 15 rebounds. It marks the 53rd double-double of her career. Gustafson became the only Hawkeye in program history to score 700 or points in a single season.

Iowa built a 20-point lead in the 4th quarter.

Iowa finishes the regular season with a 23-6 overall record and an 11-5 mark in Big Ten play. It marks Iowa’s best regular season finish since 2014-15.