This news story was published on October 26, 2017.
Advertise on NIT • Subscribe to NIT

MASON CITY – A Mason City man who was arrested in connection to graffiti sprayed on the Meredith Wilson footbridge in April is guilty and has been sent to jail.

Back in April, Bill Grouette, Jr., age 33 of Mason City was charged with felony second-degree criminal mischief in connection to a series of spray-paint graffiti allegedly committed between April 15 thru April 19, 2017. Police allege that Grouette spray painted locations along Hwy 122 East, the 400 block of South Federal, and the Meredith Wilson Footbridge over a few days.

The estimate to sandblast and resolve the graffiti is $1,587.00. Police are awaiting one more estimate for a bus bench that was defaced. Grouette was cited and released as he awaited a trial.

Grouette later entered a guilty plea to third-degree criminal mischief.  He was sentenced to 365 days in jail with all but 60 days suspended.  He was put on probation for a year an must pay $1,912 in fines and court fees. 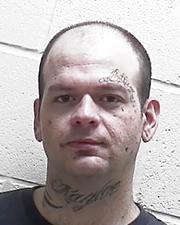