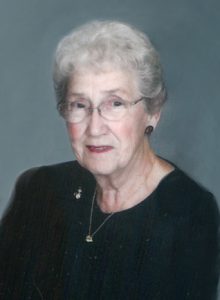 A funeral Mass for Marj Staudt will be held 10:30 a.m. Tuesday, September 5, 2017, at Immaculate Conception Catholic Church in Charles City with Reverend Gary Mayer celebrating the Mass. Burial will be at Calvary Cemetery in Charles City.

Visitation will be at Hauser Funeral Home from 5:00 to 7:00 p.m. Monday, September 4, 2017 with a Scripture Service beginning at 7:00 p.m. Visitation will continue one hour prior to the funeral Mass Tuesday at the church.

Marjorie Rose (Heddinger) Staudt was born in Kossuth County, Iowa, on February 10, 1927, the first child of George and Agnes (Elbert) Heddinger. She attended rural school beginning when she was four years old, grade school in Fenton, Rodman and Cylinder High School and graduated from Emmetsburg High School in 1944. Marj continued her education at LaJames School of Cosmetology in Mason City. She worked in Charles City at several salons (two of which were Edna Daddow and Pauline Majewski) as well as at the Baptist Nursing Home.

Marj married Harold Staudt on April 24, 1948. She was a member of Immaculate Conception Catholic Church where she had been active in St. Theresa’s Circle, Liturgy Committee, Rosary Society and the choir. Marj also sang with the Sweet Adelines.

Marj was very talented at refurbishing furniture along with other crafts and enjoyed attending auctions and antiquing. Marj was an excellent cook, baker, candy maker and an accomplished seamstress. She enjoyed fishing, wintering in Texas with Harry, and loved time spent with her family (especially her grandchildren and great-grandchildren).