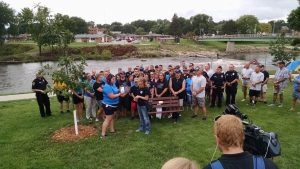 CHARLES CITY — Local law enforcement to be honored Wednesday in Charles City at a ceremony.

The festivities will be held on Wednesday, July 26, 2017, at 6:30 pm to honor local and Iowa law enforcement. There will be a tree dedication ceremony behind the Charles City Library at the riverfront for local fallen officer Adam Liddle. Adam was born in New Hampton, Iowa, and graduated from Charles City High School in 1998. He was a deputy with Black Hawk County and then an officer with the Waterloo Police Department.

A park bench will be donated to the City of Charles City in honor of all Iowa Fallen Officers. The bench is located outside the Charles City Library doors (west side). “We are proud to have these visible reminders of the sacrifice law enforcement officers make to ensure safety in our communities,” states Charles City Police Chief Hugh Anderson.

Additionally, there will be a law enforcement ceremony held on the main stage on Jackson Street at 9 pm the night of July 26th.

The tree and bench were donated to the community by the Blue Guardians; they would like to offer a special thank you to the City of Charles City Parks & Recreation Department, especially Steve Lindeman, and Otto’s Oasis, Jeff and Lori, for making this possible.

After the event was held, Charles City police said in a statement “Many of the officers assisting yesterday were present with the CCPD as the Blue Guardians donated a bench in honor of fallen Iowa officers. Whittney also presented a plaque to Adam Liddle’s widow to commerate the tree planted in his honor on the riverfront. Liddle was a graduate of CCHS and a Waterloo police officer when he died in 2015. Thanks for all the work the Blue Guardians did for these two memorials.”