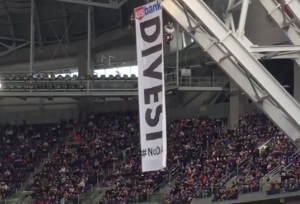 MINNEAPOLIS – Three people were arrested after hanging a protest banner connected to the Dakota Access Pipeline controversy at US Bank Stadium Sunday during the Vikings football game.

Minneapolis police officers working off-duty at U.S. Bank Stadium, 900 5th Street South, responded to a report of two people climbing a support truss inside the stadium. At approximately 12:47 PM, officers saw the two suspects had climbed to the top of the truss, near the roof of the stadium, and had lowered a banner.

Officers set up a perimeter around the area and requested Minneapolis Fire and medical personnel from Hennepin County Medical Center (HCMC) to respond to the scene. It was at that point that officers saw the two suspects had lowered themselves from the truss and were now hanging by ropes over the spectators. Officers and staff from the stadium evacuated spectators seated directly below the two suspects to ensure everyone’s safety.

Crisis Negotiators from the Minneapolis Police Department respond to the scene to facilitate conversation with the suspects in an effort to get them to climb down and to keep everyone safe. At approximately 3:00 PM, after the game had ended, the two suspects climbed down and were arrested by police.

Karl Mayo, age 32, and Sen Holiday, age 26, were evaluated by medical staff, including a physician from HCMC who had responded to the stadium, and found to not be injured. Mayo and Holiday refused any further medical treatment.

The Minneapolis Police Department will be meeting with all U.S. Bank Stadium partners, including the Minnesota Sports Facilities Authority (MSFA), the Minnesota Vikings, Monterrey Security and SMG Worldwide Entertainment and Convention Venue Management as the investigation into Sunday’s events continues.

This guy is repelling upside down inside US Bank Stadium pic.twitter.com/FWNjjQ7pYU

There is a guy in a #Vikings Brett Favre jersey hanging from a banner inside US Bank Stadium. For real. pic.twitter.com/MJRtqNX9Zz