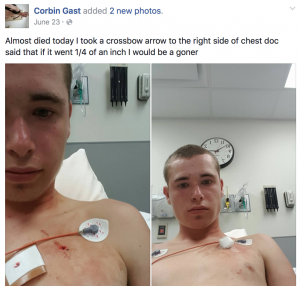 CHARLES CITY – A Charles City man accused of shooting his roommate in the chest with an arrow says he is not guilty and will stand trial in January.

On June 23, 2016, 19-year-old Devin Hundley allegedly shot his roommate, Corbin Gast, in the chest using a crossbow during a physical confrontation over their shared dwelling. The arrow narrowly missed Gast’s heart. Gast allegedly walked to the police station to report the incident and was then hospitalized.

Later, Gast said he “almost died today … I took a crossbow arrow to the right side of chest … doc said that if it went 1/4 of an inch I would be a goner.”

Police investigated at their shared residence in the 600 block of Second Street. Hundley was later arrested on a felony charge of willful injury causing bodily injury. He was held in jail until July 7 then released, pending court proceedings. 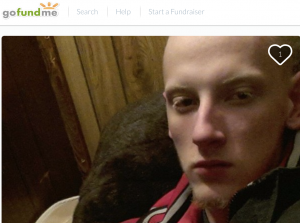 Hundley sought cash after his roomie went down for the count due to an arrow he alleged shot into the man’s chest.

Hundley entered a not-guilty plea on August 17. A jury trial was scheduled for October 20 and a pre-trial conference (possible plea deal) was set for October 11.  The case was postponed.

Being without a roommate took a financial toll on Mr. Hundley.  “I have been making just enough money to get by, I’ve been trying to get a second job so I can save money but my job history gets in the way, so I don’t have any money saved up,” Hundley complained, on a GoFundMe page he set up August 6 that was later deleted. “I have only 30 days to find a place so I have to find money for down payment and first month’s rent.”

His grandma, Ali Parker, chipped in $20.00, the site said, before it was taken down.

“Ok I gave my little bit I could give,” Ms. Parker said. “Come on family this is my grandson and he needs help.”

Court records now show that Hundley is set for a jury trial on January 4 and a pre-trial conference (possible plea deal) on December 12. 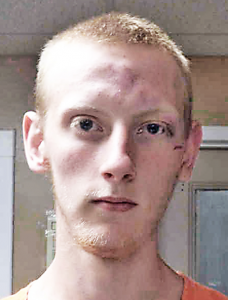