MASON CITY – An alleged attack on a person led to the arrest of one Mason City man, with the possibility of more arrests to come as police investigate.

The incident took place on the evening of August 20. At about 8:30 PM, Mason City police were called to investigate an assault that took place in the 700 block of North Delaware Avenue. Police tell NIT that “one of the victims had injuries to his face and head.”

As a result of police investigations, 18-year-old Rudy Huerta was arrested and taken to jail. Police say the case is still under investigation as others may have been involved with Huerta and participated in the attack. NIT was told Wednesday night that as many as three men may have attacked the victim.

Huerta remains held in the county jail on a charge of felony willful injury. He’s also been charged with violating his probation in a felony second degree robbery case.

NIT reported on the activities of Huerta back in October of 2014, when a local mom described an incident in which Huerta and his cohorts alleged attacked her son. At the time, she told NIT that Huerta and other teens who were in a gang she referred to as the “Savage Squad” attacked her son and other teens who were waiting to get into a local business for recreation. That story is here. 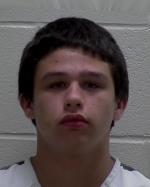