This news story was published on June 2, 2016.
Advertise on NIT • Subscribe to NIT 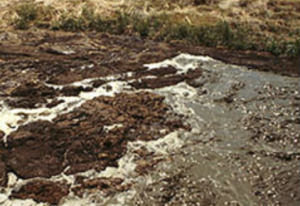 The hose was not in use. However, about 800 to 900 gallons of residual manure leaked from a small hole. An unknown amount of manure reached an unnamed tributary of Four Mile Creek.

Iowa Select Farms (a major pork producer) representatives reported the spill as they responded, quickly placing small dams in the unnamed creek to collect manure and pumping it out to land apply it.

Wednesday morning, DNR was on site and concluded most of the released manure probably remained in the right of way or on the shoulders of the gravel road.

Iowa Select continues to clean up, scraping and gathering manure along the road edges.