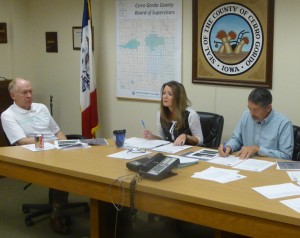 MASON CITY – NIT has obtained a fascinating audio recording of Tuesday morning’s Cerro Gordo supervisor’s meeting, where a group of concerned citizens met with elected leaders and held a heated discussion about the drawbacks of an enormous pork processing plant destined for Mason City.

NIT was able to obtain an audio recording of the Board of Supervisors meeting for March 29, 2016. In this meeting, for well over an hour, supervisors Jay Urdahl and Phil Dougherty held an in-depth discussion with citizens who are opposed to the Prestage Foods pork processing plant. During the meeting, both supervisors made indications they were not 100% in favor of the development, which is just weeks away from final approval by the Mason City council.

“We need to rally the troops here,” it was said to supervisors during the meeting.

“I think the Globe Gazette has given the marching orders to its reporters … anyone who has a difference of opinion is not going to be let into the discussion,” Jay Urdahl said. “I’ve never seen the tub-thumping on a project like this before.”

“All the small towns are going to be affected,” Mr. Urdahl said. “You can run, but you can’t hide.”

A county official said the county has no control over the number of hog confinement facilities that may spring up in the county. It was said confinements can go up within 1875 feet from anyone’s front door.

After the supervisors meeting, the concerned citizens then drove to Clear Lake and met with Mayor Nelson Crab and City Administrator Scott Flory, who provided the following statement:

“Mayor Crabb and I met this afternoon with a small group of concerned area residents about the proposed slaughter facility. They expressed a great deal of enthusiasm and support for everything that has gone on in Clear Lake for the last +15 years. They indicated that it appeared as the Board of Sups was not in majority favor of the proposed facility and asked for our opinion. The Mayor and I are certainly understood their concerns and don’t disagree that this is a project that has many broader issues associated with it on top of jobs and tax base. However, we indicated that it was doubtful that the City Council of CL would be interested as a political body in engaging in a political discussion about what was in the best interest of the residents of MC or any other community. Those kinds of political conversations are best held between constituents and their elected officials. It should be noted that neither Nelson or I through our participation in the north Iowa corridor EDC were involved in any conversations regarding this proposed facility and only were made aware of it just prior to the public announcement. I do expect some interested area residents will appear at the next city Council meeting in CL and speak in opposition of the MC project.”