Aron Bierl, age 29 of Nora Springs, allegedly harassed a person in Nora Springs on September 6, 2015. Nora Springs police filed a charge of third degree harassment on September 8; he was served with a warrant the next day. After a not-guilty plea, Bierl was released from jail in Charles City after posting bond. He was to stand trail on September 28, but Bierl’s public defender asked for a continuance, which was granted. The jury trial was then set for October 12. However, Bierl did not appear in court, and a second arrest warrant was issued by a judge. Bierl was arrested by Charles City police on that afternoon and taken to jail. A cash bond was posted that day by Ronald Bierl, leading to Bierl’s release from jail. A no-contact order remained in place throughout these proceedings.

A non-jury trial is scheduled of November 28 in Floyd county district court. 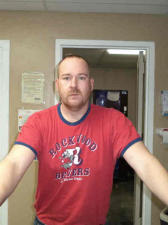