This news story was published on July 16, 2015.
Advertise on NIT • Subscribe to NIT

Republicans called the cooperation between the campaigns “a testament to their joint commitment to elect a Republican president in 2016.” 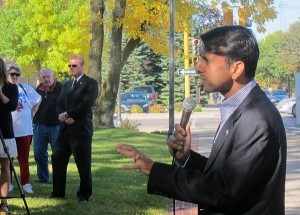 Governor Bobby Jindal of Louisiana speaks to a crowd in Mason City’s Central Park on Wednesday, September 26th, 2012. He is again running for President.

“For the first time all campaigns are coming together to make it crystal clear that we are ready for 2016 and will all work together to make sure one of our candidates is elected to the White House,” Chairman Jeff Kaufmann said. “There are 481 days until the election, and we’re already laying the groundwork for success.”

Chairman Kaufmann will lead a door knock in the Cedar Rapids area following the rally. Door knocking teams will also be dispatched from the Iowa GOP’s offices in Sioux City, Des Moines, and Ottumwa.

“While tired ideas of the Democrat Party will be on full display this weekend, our Republican candidates will be represented at the Iowa GOP’s United Iowa event just a few miles away,” Reince Priebus, chairman of the Republican National Committee said. “Unlike the Democrats, we have a robust field of strong, highly talented Republican candidates capable of defeating Hillary Clinton, who the American people find dishonest and untrustworthy.”

The United Iowa rally will be led by Chairman Jeff Kaufmann, Kim Reem, president of the Iowa Federation of Republican Women, and representatives from 15 presidential campaigns. It will take place on July 17, 5 p.m. at the Eastern Iowa GOP Office, 1204 Dina Court, in Hiawatha.

.United Iowa is a coalition of Iowa Republicans who have pledged to unite and work together to elect a conservative to the White House in 2016.