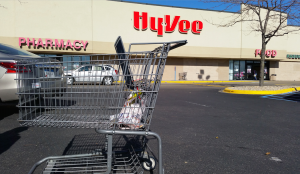 The trouble started at around 6:30 PM Monday night at H-Vee West, 2400 4th Street SW, when a caller reported to police that some young male subjects had loaded a Hy-Vee shopping cart into their white Ford F-150 and drove out of the parking lot. Soon, an off-duty Osage police officer spotted the pickup truck parked in the Wl-MArt parking lot; he then called police. Police were dispatched to that area and also to Hy-Vee West to seek a statement from employees there, who indicated they wanted to press charges if the culprits were caught.

However, the three juvenile suspects then got in the truck and drove out to the area of Community Motors and the Cinema West Theatres. Iowa State Patrol and Clear Lake police were notified to watch for the truck on Highway 122 and Interstate 35.

Police did stop the vehicle in the area of Highway 122 near Community Motors. Three juveniles from the Belmond / Kanawha area were charged with 5th Degree Theft.

“The males put a cart in their pick up truck and drove away,” Mason City police said.

The cart was returned to Hy Vee West and its estimated value was about $200.

Iowa State Patrol assisted in stopping the vehicle with the teens inside.