MASON CITY – The stakes keep getting higher for a Mason City man, now charged with felony stalking in addition to other charges.

Nick Alan Moser, age 21, was served a warrant in the Cerro Gordo County Jail on October 24, alerting him that he has now been charged with felony D stalking in connection to a harassment case.

Moser is facing two counts of first degree harassment, the stalking charge, and a new charge of violating a protective order, which landed him in jail on October 22. He now awaits a contempt hearing on January 27 and is held on $2,000 bond.

This latest trouble for Moser began in September.

According to police, late on the evening of September 16, Mason City police responded to the area of 10 1st Street NW, in a parking lot west of city hall, for a disturbance call. Moser had allegedly approached a car with a female and other witnesses inside and threatened to retrieve a gun from his car and shoot her. Moser was arrested at the scene, jailed, and later released until he was arrested for violating the court-imposed protective order. 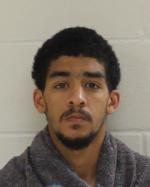