MASON CITY – Circumstances have been revealed surrounding the arrest of a Mason City man who was recently found passed-out drunk with two young kids and at the Big Blue pit.

Police told NIT that on August 24, at about 6:00 PM, witnessed made an emergency call to police to report an apparently intoxicated male passed out at Big Blue. The male subject, soon identified as 38-year-old Chad Michael Chase, was at the pit with his five-year-old son and an 8-year-old child who was described as a friend of the family.

Police arrested Chase for public intoxication that day and a DHS referral was made. Sober parents were contacted to come pick up the kids.

Police tracked down witnesses and the ensuing investigation led to two charges of child endangerment, aggravated misdemeanors. Chase is now awaiting an arraignment on October 1. He already pled guilty to the public intoxication charge and owes $288.75 to the courts.

This weekend, Chase was discovered at the Plaza West strip mall, again with a 5-year-old child with him. He was reported to be heavily intoxicated, asking for rides, and making gestures toward females. Police arrived and quickly located Chase and his young son. Police took the son into protective custody briefly until they brought him home to his mother. The boy was unharmed. Chase was arrested for public intoxication and a DHS referral was made.

Chase has been accused of violent crimes on several occasions. He is also a third offense drunk driver, making him a felon. 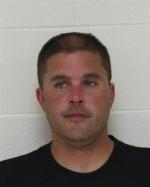