MASON CITY – A Mason City man accused of felony burglary for stealing from his friend skipped his court date Monday morning and was promptly brought to jail.

Richard Dean Winkowitsch, age 41, was due in court in Mason City Monday morning at 8:30 AM, but failed to appear. After 5:00 PM Monday, he was booked into the jail on an arrest warrant, held on $5,000 chase bond.

Winkowitsch was charged with felony third degree burglary by Mason City police after officers went to 27 Winnebago Way on the morning of September 6 to talk to the property owner about Winkowitsch entering his home while he was gone and stealing a small amount of money from him the day before, on September 5.

After an investigation, police determined there was probable cause to file a charge of felony D third degree burglary against Winkowitsch. He was jailed and later released on September 8 as he awaited a hearing.

Winkowitsch is a convicted felon. He was accused in 2005 by Hampton police of felony D third degree felony and was found guilty in 2007. After a number of probation violations in that case, he was sent to prison in 2008. 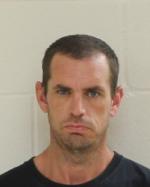