Protestors at MC circus: “We are the voice for the voiceless” 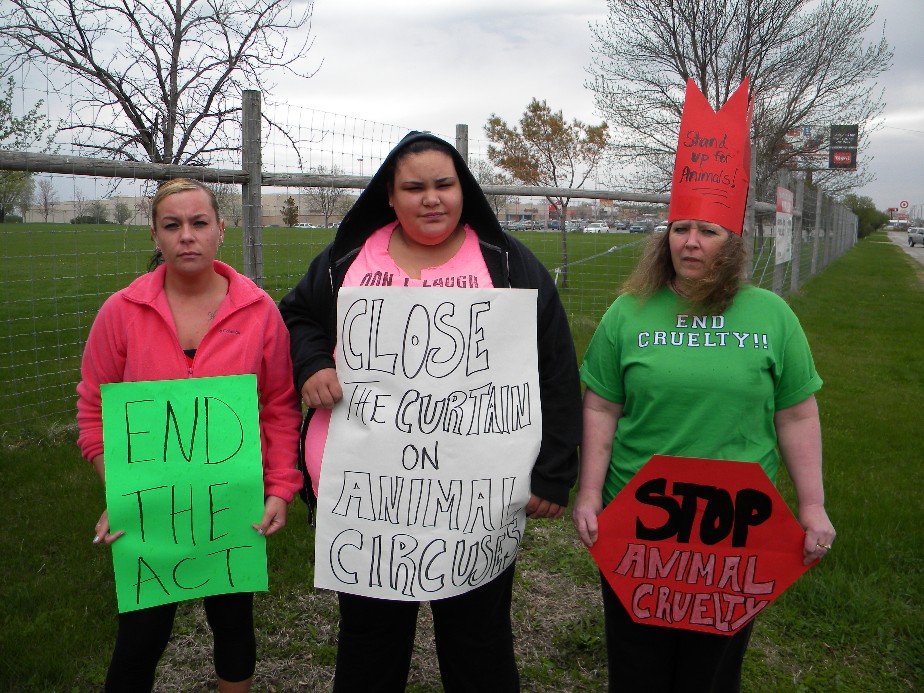 MASON CITY – The circus came to town, but not everyone was gleeful about the show.

Last week, a petition was started by a young Mason City woman to tell the Chamber of Commerce that some people do not appreciate the circus as a form of entertainment, and that it’s not wanted here. A few days – and a little publicity – later, the petition had well over 200 signatures with more coming in.

On Saturday, Brianna Flores, who started the petition, went to the North Iowa Events Center with some other supporters to protest the circus show. They stood outside the main gate of the Events Center grounds protesting the alleged animal cruelty within the Shrine Circus that was performing in the Four Season Center Building this weekend.

“We are here to protest peacefully and raise awareness. To let the people of North Iowa know that the animals deserve better, ” Brianna explained. “We are the voice for the voiceless.”

Madison Porisch, Brianna’s boyfriend, elaborated, saying “I think that it’s time for people to do the right thing. There is no financial gain for the community great enough for the animals to be exposed to such cruelty. It’s just cheap entertainment.”

One of Madison’s signs read “Honk for the Animals”. Bystanders reported a count of twenty-five honks during the hour of the protest.

A lot of “people put their hands in front of them, not wanting their picture taken as they drove to watch the unnatural performance of these exploited animals,” another person told NIT.

“If the circus comes back next year, we’ll be here again,” said Breanna. “People need to know of the inhumane way that these animals are treated.”

The small group will be out protesting at each show. If you’d like to join them, they’d be happy to have you. More detailed cruelty of the animals are told, by Breanna, in the video.

Reportedly, a complaint was made to police about on an elephant at the fairgrounds. The caller said the animal had sores on its body and the handlers were not treating it correctly.