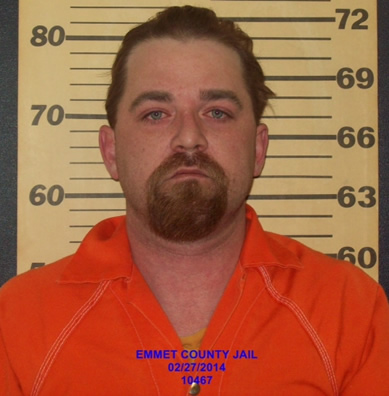 ESTHERVILLE – Police in this small North Iowa town are dealing with a murder in a trailer court this week.

According to the Iowa Department of Public Safety, on February 26, 2014, at 7:58 P.M. the Estherville Police Department responded to a 911 call to 2302 3rd Avenue South, Lot 108, in regards to a person being shot. Upon arrival, officers located a female victim, identified as 30-year-old Michaela Lynne Jordan of Estherville, with a single gunshot wound. Officers determined that Michaela Jordan was deceased upon their arrival. Responding officers were able to obtain witness statements that assisted in the case.

Investigators obtained a search warrant for an Estherville residence located at 721 North 7th Street in an attempt to locate the firearm and related evidence of the shooting. The investigators also obtained an arrest warrant for 1st Degree Murder, a Class A Felony, for 35 year old Scott Anthony Sudbeck of Estherville.

The warrants were executed at 4:36 AM by the H.E.A.T. Tactical Team (High Risk Entry and Arrest Team). During the execution of the warrant, tactical team members arrested Sudbeck in connection with the death of Jordan. Sudbeck was taken into custody and transported to the Emmet County Jail where he was booked and faces a $2,000,000 dollar cash only bond.

During the investigation, investigators determined that the victim was the target of Sudbeck and that there were no other persons in danger.

Investigators then obtained two additional search warrants for a motor vehicle involved and another for the victims’ residence. Officers were able to obtain a substantial amount of evidence in the case.

Other agencies assisting in the case are the Estherville Ambulance Service and the Iowa State Medical Examiner’s Office.