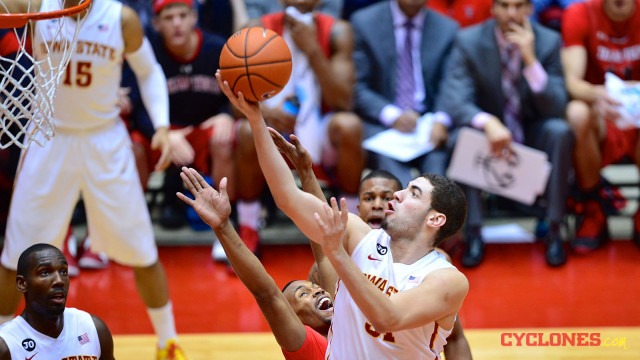 The Red Raiders came all the way back from an 18-point second-half deficit to go ahead 62-61 with 3:04 remaining in the game.

But the Cyclones kept their composure. ISU scored on five of its last six possessions, including three-straight buckets to go ahead by five points (67-62) with 1:25 left in the game.

DeAndre Kane and Georges Niang each tallied 17 points in the win.

A 7-0 run gave the Cyclones a 31-25 lead with 4:03 remaining in the first half. The run was capped off by a transition pull-up trey from Naz Long, his third of the opening period.

The Cyclones ended the half on an 8-0 flurry to go into the break ahead 39-29. Niang had five points in the run, including a long trey with under 0:20 seconds left.

A Dustin Hogue bucket put ISU up by 18 points (51-33), but Tech quickly went on an 8-0 run, as the Cyclones got a little careless for a stretch.

Moments later, it was just a five-point Cyclone lead (53-48), but Ejim scored on a putback and then followed the hoop with a monster dunk via a feed from Monte Morris, who started the break with a steal to make it 57-48 ISU.

As Ejim and Hogue each picked up their fourth fouls and went to the bench, the Cyclones started to struggle. ISU failed to score on six-straight possessions to allow Tech to cut the gap to just one point at 57-56 with under six minutes remaining.

Jaye Crockett gave the Red Raiders their first lead of the second half at 3:04 mark with a putback to make it 62-61.

ISU then made the plays down the stretch.