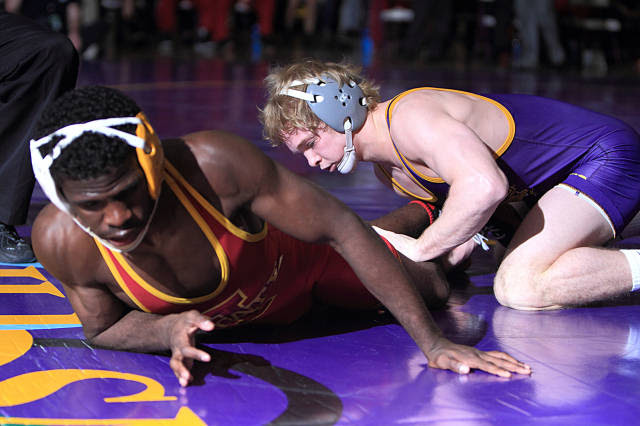 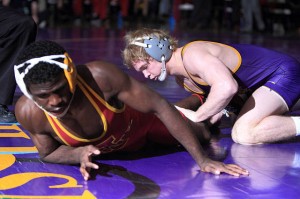 “Our seniors wanted to go out beating them,” said Schwab. “We wanted to continue building and make a statement.”

UNI remains just one of three teams unbeaten in the top 25, improving to 10-0. They are 5-0 in the Mid-American Conference.

Iowa State got the early lead at its strongest weight class. No. 2 Kyven Gadson earned a major decision. However the Panthers would take the next five, earning bonus points at 125 pounds with a major decision by No. 6 Dylan Peters, a tech fall by 133-pounder Joe Colon and a first-period pin by No. 14 Joey Lazor.

Headed into this weekend, top-ranked Colon was third in the nation for tech falls. He now has eight on the season.

Iowa State got the next three, but No. 5 Ryan Loder extended UNI’s lead with a 5-0 decision.

In the main event of the night, All-American Cyclone Michael Moreno prevailed, tallying a come from behind 9-6 victory over No. 11 Cooper Moore of UNI. Moreno trailed 6-4 with under a minute left in the match before hitting a five-point move to claim the lead.

The Panthers got their win in front of the second sold-out house this season.

“Our guys feed off (the crowd) and love it,” said Schwab. “We tell our guys – win or lose – let’s try to score points and make it exciting for fans.”

UNI’s last undefeated season (10-0) was in 1956 under Bill Koll. The team took 10th at that year’s national tournament.

No. 2 Kyven Gadson , who wrestled his first collegiate dual match in front of his hometown, pushed his dual win streak to 26 with a 11-3 major decision over UNI’s Basil Minto. The Waterloo, Iowa, native scored four takedowns in the match and racked up 1:13 of riding time.

UNI will host Kent State at 1 p.m. Sunday in the West Gym for its second meet of the weekend.

Kent State is tied for fourth in the conference rankings, while UNI is favored.