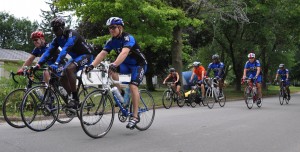 DES MOINES – Not since big hair and neon spandex has the community of Mason City hosting a RAGBRAI over night stop.

That year was 1985. Later this month, Mason City will find out if it lands one of eight coveted overnight stops on the ultra-popular cross-state bicycle tour.

Visit Mason City, the town’s tourism outreach agency, received an email notification Friday alerting them to the announcement party, which will be held January 25th in Des Moines.

Mason City submitted a letter of interest last year seeking to be an overnight stop on the Register’s Annual Great Bicycle Ride Across Iowa (RAGBRAI).

Although not an indication that Mason City had been selected, all towns who submitted bids may send representatives to the announcement party.

According to the email the Visit Mason City received, RAGBRAI is celebrating its 42nd year in 2014.

“We are looking forward to the upcoming RAGBRAI Route Announcement Party in Des Moines on Saturday, January 25th when we officially reveal the 8 overnight towns for RAGBRAI XLII,” the email from RAGBRAI officals said. “We appreciate the interest that your town has shown to serve as a host community for RAGBRAI this summer. The dates for RAGBRAI XLII are July 20-26, 2014.”

RAGBRAI will not give towns any notice prior to the announcement party as to whether they were selected. The official announcement will take place between 9:00-9:30 p.m. that Saturday, January 25th.

Live video of the overnight towns will be announced live at RAGBRAI.com. Live video starts at 8:30 p.m.  RAGBRAI will also announce the eight overnight stops on Twitter.