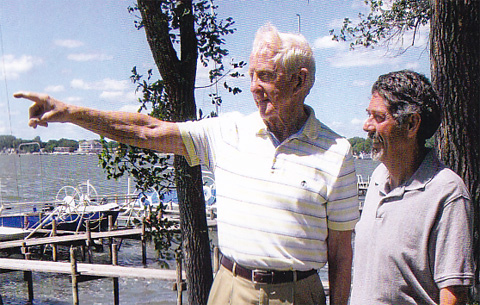 In a flier that was recently mailed to a number of registered Republican party members in Cerro Gordo county, Blodgett quoted John F. Kennedy in saying “Sometimes, party loyalty asks too much.  I agree with that.”  See the flier here.

“Phil Dougherty is a friend of mine, and a good, honest man. He’s done an excellent job as a Supervisor, and he votes the right way,” Blodgett told NorthIowaToday.

“I admire people who take an active enough interest in community affairs and makes the sacrifices to seek public office,” Blodgett said. “Obviously, Mr. Watts is an energetic man who feels strongly enough about the issues to run for office, and I credit him for that. But Chris still favors expanding the Board of Supervisors, which I oppose. My opposition to Chris Watts isn’t personal; if it was, I’d say so. However, we’re on different sides of an issue which is of great importance to me, and, I believe, and to most Cerro Gordo county voters. He’s also running against Phil Dougherty, whom I want to see re-elected.”

Watts, when reached for comment, said, “I’m not pursuing that,” in reference to expanding the Board of Supervisors.

Supervisors Jay Urdahl, Bob Amosson and Phil Dougherty approved a 2.5% pay increase for themselves in March. Supervisor pay has gone from $31,500 in 2000, Dougherty’s first year on the board, to $46,454 currently.

Mr. Dougherty has declined thus far to tell NIT about his campaign platform.

Blodgett, 74, is a conservative who was well-known for his independence while representing Mason City and Clear Lake in the Iowa Legislature, where he served from 1992-2001, as the Assistant Majority Leader. “I worked with the Democrats on a number of issues, particularly relating to education and health care,” the retired lawmaker told NIT.

Blodgett was appointed by President George W. Bush as a federal administrative law Judge in 2001, where he ajudicated legal cases relating to hospital corporations, states vs. the federal government, HMO’s, and Medicare and Medicaid services. He served in both terms of the Bush Administration before retiring to Clear lake in 2008. Prior to serving in public office, Dr. Blodgett practiced orthodontics in Mason City for nearly 30 years, retiring as an orthodontist in 1992.

“The old saying, ‘If it ain’t broke, don’t fix it’, applies to this race,” Blodgett told NorthIowaToday. “Our Supervisors here work very well together, and they all serve our county very well. So when Phil asked me to endorse him, I readily agreed, because he deserves re-election.”