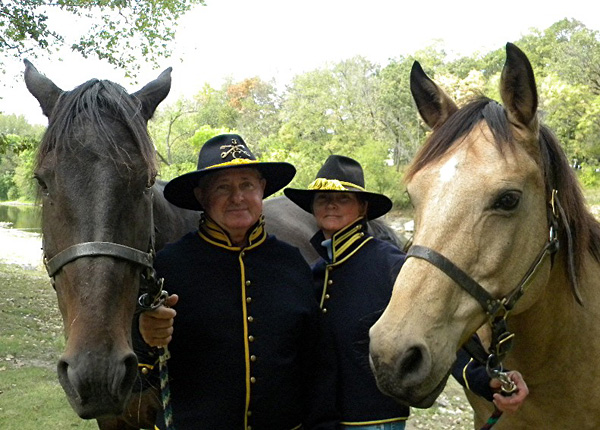 MASON CITY – Around 2:30 pm Friday, the first of the Civil War re-en-actors were starting to arrive and set up camp for the 19th Annual Civil War Battle and Encampment at East Park.

The event kicks into high gear this weekend, starting Saturday 7am-10pm and then Sunday 7am-5pm. Admission is free and donations are accepted.

A living history class was going on Friday for the public and students got to learn first hand about soldiers; how they lived, how they battled and how they survived.

Dennis Williams, from Woodburn, Iowa (by Osceola), said, “Yes, we are the early birds, but we are still three hours behind the time I wanted to be here. We started out at 9:45 this morning and just arrived about 2:30.”

Williams brought with him two full size cannons, “One is a 1841 6-Pounder, a long range gun, normally this would be a rifled barrel and the second one is a 1841 Field Howitzer. It’s a 12-pound smooth bore. I am Gun Commander of this one,” Williams explained.

He explained how you rise in rank. “This is my eleventh season and I just got promoted. Just like the military, you have to work your way up.”

Steve and Diane Roberts are from Stacy, Minnesota. They brought along their horses, Topper and Bugsy. “They are used to the sounds of guns and cannons. They go out west to the 7th Cavalry in Ft. Sisseton, South Dakota and Ft. Lincoln in North Dakota,” said Steve.

“We decided to make the trip to Mason City this weekend. We have a nice place here by the river and were provided hay. The horses like it, it’s good hay.”

“We’ll be here all weekend, so come down and watch us in action,” said the Roberts.

The weekend events start each day by having a Pancake breakfast served by Cub Scout Troop 4034. The breakfast will be provided after Reveille from 7:00 to 10:00 am at one of the park shelters. For $4.00 a plate you get pancakes, sausage, coffee and juice.

The events for Saturday are Commanders meeting, Infantry drill and artillery drill, Lincoln press conference, at 11:15 AM the dunking of Mary Regan and then Bob Welch at the Band-shell. From noon on is camp concert, Ladies Tea at band-shell, Battle of Shiloh, first day with surgical demonstration following, Auction of Homemade baked goods and Bob Welch at the the Band-shell at 4:00 PM. At 4:30 PM there will be a pirate’s treasure hunt, then supper and Lincoln’s play at 6 PM. At 8:00 PM, a military dress ball followed by a night fire and at 11 PM the camp closes.

Sunday’s schedule is: Reveille, breakfast, camp opens at 9:00 AM with Church at 10 a.m., a Commanders meeting, Artillery and Infantry drills, mail call and concert at the band-shell. At 1:30 the Battle of Shiloh, second day with medical demonstration following the battle. At 3:00 PM is the final concert and 4:00 PM the camp closes.