MASON CITY – A Mason City woman had a new brush with the law Friday evening.

Michaela Jo Thureson, 23, was arrested by authorities for the third time for an alcohol-related offense, this time public intoxication (123.46).  She was booked into the Cerro Gordo County Jail at 12:36 AM Saturday morning.

Thureson, who claims to be employed at Kentucky Fried Chicken, has had two other public intoxication or illegal alcohol consumption charges in the past.

Thureson plead guilty to unlawful consuming of alcohol in 2007 after a February 20, 2007 incident and subsequent citation from the Mason City Police Department.  Judge Charles Biebesheimer gave Thureson a $100 fine.  Thureson’s Arby’s paycheck was set to be garnished at $20 bi-weekly to cover the fine and court costs ($190.87 ) at her request, but Arby’s told the court she was no longer employed there.

Thureson was put on a new payment plan on October 6, 2007, after being busted a second time by the Mason City Police Department for unlawful consumption of alcohol on August 24, 2007.  Contempt charges for failing to pay her old court fines were dismissed by Judge John Cherry.

Online records show that an arrest warrant was issued for Thureson by Judge Charles Biebesheimer in January of 2008 for contempt of court and a new payment plan was issued that month.  This time, $20 bi-weekly was to be held from her paycheck at Carlos O’Kelly’s.  By the end of September, 2008, the wage assignment was canceled and the fines were finally paid.

Most recently, Mason City Police filed charges against Thureson on August 22, 2011  after a domestic incident that took place on August 20th.

Thureson plead guilty to domestic abuse/assault and Judge Patrick Byrne sentenced Thureson to 2 days in jail as well as $470.52 in court costs.  That amount remains unpaid. 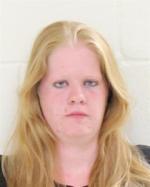