EDITORIAL: Public a no-show on statues and other issues 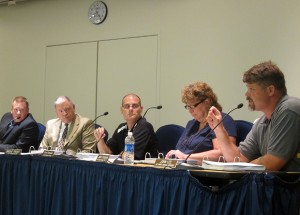 What does it take to get the public involved in an issue?

There were strong opinions on the Chamber of Commerce statue debacle, judging from the comments left here on NIT, and even some council members admitted they received calls and letters on the matter from their constituents, but it wasn’t enough to bring them out in person.

And the calls and letters, likely some for and against this particular project, were not enough to sway the council at all.

(PHOTO: Councilman John Lee really tried to do the right thing Tuesday night, as he speaks on the statue project in the above photo.  Take a gander at the looks on the faces of the three men to his right and you might see the pressure he faced to vote yes.  Click photo for larger view.)

Really, only when people show up in person is a difference made.

I have witnessed this a couple times in the last two years as I have followed Mason City politics.

First was with the “gentleman’s club” issue.  That one packed the room, and the idea was soundly put to bed, no pun intended.

Then we saw a strong turnout with the garbage burning plant, with strong opinions on both sides.  That one narrowly lost and our friends from Colorado… or was it Wyoming… or was it Nevada… packed up and left town.  Maybe they are in Antarctica now busy with their plant down there.

We also saw a strong turnout on the multi-purpose arena project meetings… where is that project at now?  O yes, the city gave up on it.  How’s that search for a “shovel-ready site” going?

Anyway, because the public is staying home – I call this apathy – it is easy for certain folks to get away with just about anything as long as it’s “a small amount of money” as Councilman Scott Tornquist described the dollars the Chamber was asking for.  City Hall has become was Max, Don and Jeff guarded against: Wasteful.

Mayor Bookmeyer has his team in place, the public is asleep at the wheel, and the handouts are just beginning.  This behavior will be justified at all costs.

People, you need to start coming back to the council meetings and standing up for yourselves.

VIDEO: Council input from public on agenda items only:

21 Responses to EDITORIAL: Public a no-show on statues and other issues