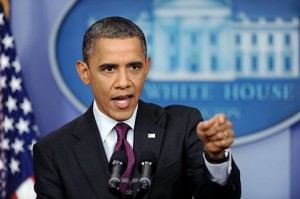 LOS ANGELES — Now that the issue of the president’s birth certificate has been laid to rest (mostly), some conservatives are turning their attention to a new obsession: Barack Obama’s college transcripts.

Last week, a website that already had offered a $10,000 reward for Obama’s transcripts from Occidental College, Columbia University and Harvard Law School, increased the bounty to $20,000.

About a year ago, Donald Trump, among the highest-profile “birthers,” helped get the mini-movement started. After the president released his long-form birth certificate, Trump abruptly changed subjects:

“The word is, according to what I’ve read,” Trump said, “that he was a terrible student when he went to Occidental. He then gets into Columbia; he then gets to Harvard. … How do you get into Harvard if you’re not a good student? Now maybe that’s right or maybe it’s wrong, but I don’t know why he doesn’t release his records.”

What do these “transcripters” (if we may coin a phrase) hope to prove?

“We’re not convinced that Barack is as smart as you media elitists keep insisting he is,” says The Trenches, the website that posted the reward. (The Daily Caller outed the responsible party as Brooks Bayne, a conservative blogger who admitted he was behind the reward.)

That rationale may strike some as a little flimsy, given that Obama was president of the Harvard Law Review, taught constitutional law, has two best-selling books to his credit and is, at the moment, leader of the Free World.

We do know a few things about the president’s college career.

The president’s presumptive opponent, former Massachusetts Gov. Mitt Romney, was no academic slouch either. According to various news reports, Romney graduated from Brigham Young University with a 3.97 grade-point average and was in the top 5 percent of his class at Harvard Business School, where he simultaneously earned a law degree.

Unfortunately for transcript transparency advocates, school transcripts, like tax returns, are private. They are protected by a 1974 law, the Family Educational Rights and Privacy Act, or FERPA.

“There are all kinds of exceptions, but the rule is records may only be released with signed written consent of the individual,” said Barmak Nasserian, associate executive director of the American Association of Collegiate Registrars and Admissions Officers. The group counts more than 2,600 degree-granting institutions among its members. “Barack Obama, like every other American, is entitled to privacy rights under federal law.”

In any case, said Nasserian, he doesn’t see much benefit in allowing voters to peruse candidates’ college transcripts.

“I am not sure looking at 20-year-old Mitt Romney or Barack Obama at that granular level of detail would make a difference,” he said. “It’s kind of a stretch to say performance in a particular course, or that they took a course with a professed Marxist, or they studied Russian for heaven’s sakes, is going to be relevant or helpful to someone making up their mind.”

Though it may be true that college transcripts are not determinative, they can certainly be revealing.

In 1999, the New Yorker published an apparently purloined copy of George W. Bush’s Yale transcript before he became the Republican nominee for president. Bush, it turned out, was basically a C student. Was this a scandal? Hardly. He never cast himself as an intellectual or brainiac, and, despite his Harvard MBA, often made fun of highly credentialed people.

During the 2004 presidential campaign, Massachusetts Sen. John Kerry was assumed by many to be Bush’s intellectual superior. But months after he lost to Bush, his college transcripts were inadvertently sent to the Boston Globe and he was revealed to be a C student as well, earning four Ds his freshman year. (Stung by allegations that his Vietnam War service was not what he had claimed, Kerry had given permission for his Navy records to be turned over to the newspaper. The college records were part of those documents.) Can a mediocre student hope to achieve the highest office?

The answer is self-evident.

“To those of you who received honors, awards and distinctions, I say well done,” President Bush told Yale graduates in 2001. “And to the C students, I say you too can be president of the United States.”