Lakers hold on to beat Nets 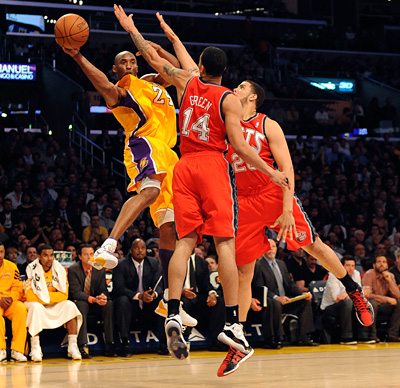 LOS ANGELES — Andrew Bynum walked into the locker room about an hour before Tuesday’s game with oversized headphones covering his ears, though the music was loud enough to be heard across the room.

The Los Angeles Lakers followed with some clatter of their own.

They lost a 17-point third-quarter lead and needed Kobe Bryant’s adventurous three-pointer with 6.8 seconds left to secure a 91-87 victory Tuesday over the New Jersey Nets at Staples Center.

The Lakers led by one when his shot rattled around the rim, took a high bounce and rattled around again before falling through with 6.8 seconds left.

Talk about a lucky seven. The ball touched the rim seven times on the play.

“The basketball gods were with us today,” said Bryant, who had 24 points.

All eyes turned almost immediately to the Lakers’ designated road game Wednesday against the Los Angeles Clippers, and whether Bynum would be part of it.

He didn’t play against New Jersey because of a moderately sprained left ankle.

“I feel good, but I don’t know. I’m going to try,” Bynum said, adding that Wednesday would be comparable to a playoff game.

When asked specifically how his ankle felt, he said, “I’m keeping up, right?” while walking briskly to his car.

He smiled coyly when probed about the fine the team levied against him last week for events relating to the Golden State game. “I’m unaware of that,” he said.

The Lakers (34-20) are 1 ½ games ahead of the Clippers in the standings, though Wednesday’s winner takes the head-to-head tiebreaker and the season series, which the Clippers haven’t won since 1992-93.

Ramon Sessions had 19 points and 11 assists Tuesday, his third double-double in seven games as a Lakers starter.

Pau Gasol started at center and had 22 points and 12 rebounds in place of Bynum.

Bynum’s ankle was heavily wrapped in black tape Tuesday as he slipped on a pair of flip-flops and disappeared into the training room before the game, presumably for more treatment. He was not on the bench for the game, though injured Lakers players often watch it on TV from the locker room.

It was the first game Bynum missed this season because of health reasons.

Despite the seemingly sizable lead after halftime, the Lakers were headed for an uncomfortable situation against the Nets (19-36) a few seconds before Bryant’s three-pointer.

Sessions tried to feed Matt Barnes while driving, but the ball ricocheted off Barnes’ hands and was surely headed out of bounds. Luckily for the Lakers, the ball grazed the shorts of Deron Williams before continuing out of bounds with 10.8 seconds left.

Referees originally said it was Nets ball but ruled it belonged to the Lakers after looking at courtside replays.

It was all Bryant needed. His three-pointer off an inbounds pass from Barnes kept New Jersey far enough away.

“I tell you what,” Lakers coach Mike Brown said. “We like to make it interesting.”

Brown said he talked to the team afterward about its continued penchant for losing large leads.

“It was basically the only thing we addressed,” he said. “We feel as a group that when we do get a double-digit lead, whether it’s against a good team or a team that doesn’t have a good record, we tend to relax a little bit.”