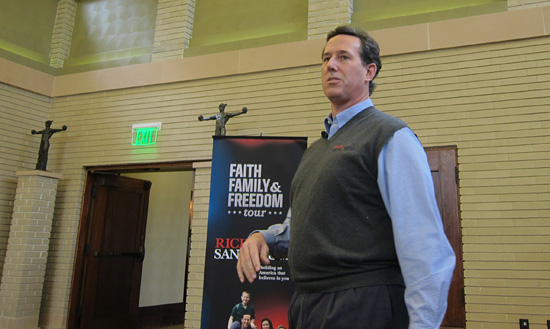 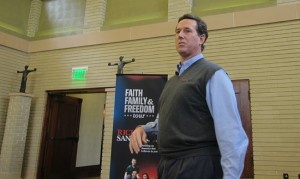 He was greeted by an enthusiastic crowd, somewhat larger than the crowds that recently showed up for his opponents Michele Bachmann and Texas Governor Rick Perry.

Santorum spoke on a range of subjects, including the usual hot-button issues such as health care, Iran’s nuclear capabilities, the federal budget and deficits, and personal freedoms. He called the program that handles the excess funds the federal government has withheld from working Americans’ paychecks over the years a “ponzi scheme.” He said that until recently, the federal government took in more than it paid out in Social Security payments and that the excess funds, by law, were used to buy government bonds. Then, the money was spent.  So in essence, the American people invested by borrowing from itself.

Santorum was in Sheffield earlier Tuesday morning and spoke at Sukup Manufacturing.

Another Santorum opponent, Newt Gingrich, will also be in Mason City this week. Gingrich will visit Southbridge Mall on Wednesday at 10:30 am.