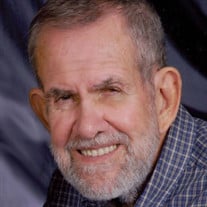 Roger was born January 9, 1939, to Henry and Lucille (Christensen) Hedegard, in Mizpah, Minnesota, the oldest of three children. He grew up in Plymouth, graduating from Plymouth High School in 1957, and attended Mason City Junior College. He worked as a farmhand, bartender, and bouncer in his younger days, before going to work at Graversen’s Hardware, where he was a familiar face to all until retiring in 2001.

Roger was a confirmed bachelor until marrying Kay (Montgomery) Ciavarelli in 1971, with the added bonus of her four children. He traded in his beloved Chevelle Super Sport for a Pontiac Station Wagon, and together they quickly added two more children to fill the third seat.

Roger enjoyed watching his grandchildren’s sporting events and rooting for the Hawkeyes, Twins, and Vikings. He also loved a good Western, a Black Velvet at the end of the day, and golfing with his friend Jerry. Roger and Jerry made a good team, as Jerry would be Roger’s eyes and Roger would be Jerry’s ears. He served on the Plymouth Volunteer Fire Department for 39 years, the Plymouth City Council, and was a dedicated volunteer for the Salvation Army (most often found in his coveralls and Elmer Fudd hat ringing bells).