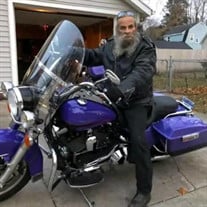 Randy Craig, 64, of Mason City, passed away Tuesday, August 23, 2022 at his home in Mason City following a courageous battle with pancreatic and liver cancer.

Donations may be left to Randy and Tracy Craig in care of Clear Lake Bank and Trust.

Randy was born on July 11, 1958 in Mason City. He attended school in Mason City and Omaha before enlisting in the United States Marine Corps. He returned to Mason City where for many years he worked as a printing press operator for the Mason City Globe Gazette.

On November 7, 1977 Randy was married to Julie Jurgens. The couple would later divorce, but reconnected and remarried on February 17, 2006. Together they shared six years of marriage before Julie’s unexpected death.

In 2012 Randy met Tracy McLaughlin and the two began dating in the spring. Tracy always claimed she would never marry, but that was before she met Randy! It was love at first sight and the two were married on August 3, 2013 at East Park in Mason City. Randy remembered their wedding day as being the hottest of the year and to this day claims his sister Penny was trying to kill him by heat stroke by playing the longest song he’s ever heard in his life.

Randy’s two loves in life were his family and his Harley. He loved going for motorcycle rides and catching up with good friends over a couple beers. He was an animal lover and adored his two dogs, Ryder and CiCi.

Randy was fiercely loyal to his family and friends, and was especially proud of all his nieces and nephews. And even though he was a biker through and through, he never forgot to hold the door open or offer a hand to the ladies in his life; an act of chivalry he was taught as a young boy by his mother and Grandma Piper.