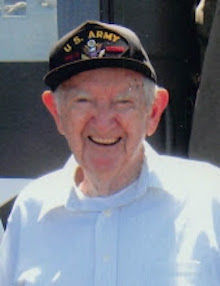 Roger was born on May 23, 1922, to Daniel and Annie (Berger) Roberts in Sioux City, Iowa. He spent the majority of his childhood years in Wells, Minnesota. As a teenager, he volunteered to join the Civilian Conservation Corps, and was stationed near Ely, Minnesota, working in the north woods. That was quite an adventure for a young man. Roger was very loyal to his family, writing letters and sending his earnings home to his mom and dad.

Roger was drafted into the United States Army in 1942 and served through the end of World War II for a total of 39 months. He was stationed in Fort Campbell and Fort Knox in Kentucky and rose through the ranks to sergeant and often filled in as staff sergeant. Roger was a natural leader. He served as tank commander and also taught artillery. He participated in a tank maneuvering competition and won the prize of a 3-day leave. He was very proud of his service in the military.

Roger was stationed in the Philippines later in the war and was on his way to take part in the Japan invasion when the war ended.

After a year of being home from the service, he met his future bride on a blind date. She was a farm girl from Leland, Iowa named Arlene Flugum. Roger was talking marriage within three weeks but was willing to wait until Arlene finished her last year in high school.

They were married on December 17, 1948. They moved as a young couple to Mason City, Iowa, remaining in Mason City all of their 73 years of marriage.

Roger was a devoted husband, dad, and son, as well as deeply loving the rest of his family. He would show his love for his family in so many ways.

He enjoyed treating his kids to shopping trips, swimming at Clear Lake, camping vacations up north and out west, family bar-b-ques, picnics at East Park, fishing, baseball, golf, and sledding. He made every holiday and birthday special. He built snowmen, skateboards, go-cart, playhouse, and swing set. He played with his kids every chance he got.

Roger was a meat cutter with Deckers and Sons (Armour’s) for 28 years, worked with Cornelia Furniture, and also helped his son Steve in his ceiling business until the age of 80. Roger was a hard-working man. He added on to the family home, and built many cupboards, shelves for Arlene and family. He was very mechanically inclined, working on cars throughout his life. He enjoyed humor and was well-known for his card tricks.

Roger enjoyed his many friends, especially his horseshoe buddies as well as his bowling friends. Roger was a kind and gentle man, always looking for the good in everyone. He was a devout Christian, enjoyed attending church, making sure his children grew up learning about Jesus. God blessed Roger greatly, and Roger often stated that he appreciated God’s love and care.

We would like to give special thanks for the love and care given by Pastor Kathy Graves, Hospice of North Iowa, and for all of his family, friends, and caring neighbors who provided so much love and support.