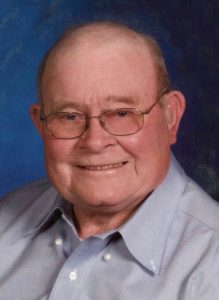 A funeral Mass for Bill Hellman, 94, of Bancroft will be held Tuesday, February 15th at 11:00 AM at Divine Mercy Parish ~ St. John’s Catholic Church in Bancroft. The funeral will be livestreamed on the Divine Mercy YouTube page. https://youtu.be/DY5IHqeN68s Visitation will be from 9 AM Tuesday until 10:30 AM at Oakcrest Funeral Services of Bancroft. Social distancing practices will be followed.

William Joseph Hellman was born on April 6, 1927, the first child of Florian and Martha Hellman, on the family farm SE of Bancroft, Iowa. It was there where he learned the value of hard work, love for the land and his Creator.

At age 18 Bill joined the Army and served in Europe during the mop up of W.W. II where one of his duties was guarding German prisoners. After his return home, he met Norma Jane Loos at a dance. They were married on September 6, 1948, at St. Olaf Catholic Church in Minneapolis.

The happy couple set up farming in Portland Township, SE of Bancroft. Bill heeded his Father’s advice that if he kept all the animals on the farm reproducing, he would be a success! On this farm they raised their eight children and were active, faithful members of St. John the Baptist Catholic Church in Bancroft. Bill served in various leadership roles there, including Grand Knight of the Knights of Columbus Council 3994. Bill took specific pride in the leadership role he played to spearhead the church front and elevator project. Bill and Norma enjoyed great times with their large families, fishing in the East Fork of the Des Moines River and following their children’s’ activities. In 2000 they built their retirement home and moved to Bancroft. Bill continued to help on the farm, climbing into the combine at age 92.

Bill lived a life of service. In addition to his church, he was an active member of the Burt, Iowa, Veterans of Foreign Wars, and was committed to his community, serving as Portland Township Assessor and as an election judge. He was a dedicated farmer and loved every aspect of farming. It was engrained in his person. He respected the powers of nature and the privilege of caring for his little corner of the world that had been entrusted to him.

Bill celebrated life in grand fashion. Fishing was his favorite pastime and he enjoyed many trips to Tuttle Lake, a week each June with his sons at Nest Lake in Spicer MN, and even a Caribbean excursion where he caught a Sail Fish. Traveling was another pastime with many trips to visit his family in California, Colorado, South Dakota, Missouri, Illinois and Eastern Iowa. He enjoyed memorable trips with family to Aruba, Alaska and Hawaii.

Bill passed away peacefully at Accura Health Care in Bancroft. The family expresses sincere gratitude to all of the members of the Accura Health Care family. They opened their hearts and gave our dad the best care that we could have ever wished for.