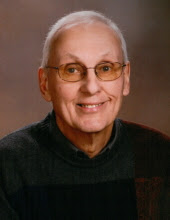 Charles “Chuck” Allen, 80, of Charles City, entered into the kingdom of Heaven on Thursday, December 16, 2021 at his home surrounded by his loving family.

A memorial service for Chuck Allen will be held at 10:00 a.m. on Thursday, December 23, 2021 at Hauser Weishaar Funeral Home with Pastor Mechille Boldt from West St. Charles United Methodist Church officiating. The family asks those in attendance to wear casual attire.

A gathering of family and friends will be from 5:00 to 7:00 p.m. on Wednesday, December 22, 2021 at Hauser Weishaar Funeral Home and will continue one hour before the service at the funeral home on Thursday.

Charles “Chuck” Stanley Allen, the son of Albert and Faith (Koebrick) Allen, was born February 8, 1941 in Floyd County, Iowa. He started his education in Marble Rock before moving to Nashua with his family and graduating from Nashua High School in 1959. Chuck continued his education for two years at Wartburg College (while working bridge construction in various counties and at Sara Lee in New Hampton) and then began working at the Oliver/White Farm plant in Charles City until its closing. He would then embark on his most beloved career of being the custodian at RRMR until his retirement in 2006. Chuck loved being around the kids all day and helping them in any way that he could. He was even recognized by Governor Tom Vilsack for his outstanding service to children as a dedicated school staff member.

On February 28, 1965, Chuck was united in marriage to Sue Osterman at Saint John Evangelical Lutheran Church in Charles City. The couple lived in Nashua for a short time before moving to rural Charles City to raise their family. This 56 year union was blessed with three children: Catherine, Christopher and Jennifer. They moved into Charles City in 2016.

Chuck was a member of the West St. Charles United Methodist Church where he served as an usher for many years and held many offices. He loved attending sporting events for his three grandsons: Kale, Dillan, and Keaton, who were the light of his life. Every year for 52 years, Sue and Chuck would get together with their friends, the Bartz family, and have their marathon of making Christmas cookies and candies. They also got together with two of Chuck’s college friends and their families for the SAM (Snider, Allen, Merfeld) yearly reunion.

Chuck was an avid gardener (fruit trees, blueberries, raspberries, strawberries, huge onions…just to name a few), enjoyed reading and working crossword puzzles. He loved watching the Iowa Hawkeyes in football and basketball (he enjoyed riding the CAMBUS to Carver Hawkeye Arena) and cheered for the Minnesota Vikings (going to a few games with Sue and Christopher).

Chuck was preceded in death by his parents; sister, Joan (Lou) Bonne; and brother, John Allen and his wife Doris.

Any memorials given to the family will be used to establish a nursing scholarship in honor of the Allen family.