CHARLOTTESVILLE, VA – Iowa played a stellar first half and held on to beat Virginia, 75-74, Monday night in a Big Ten/ACC Challenge road game.

Joe Toussaint scored his 10th point of the game on a driving layup with eight seconds remaining to reclaim the lead and Patrick McCaffery blocked Kadin Shedrick’s game-winning put-back attempt at the buzzer to preserve the victory. This was Iowa’s first road game of the season.

The Hawkeyes have won seven of their last nine Big Ten/ACC Challenge games.

Jordan Bohannon led the Hawkeyes in scoring with a season-high 20 points. Bohannon equaled a season-best with six 3-pointers made. He sank his first four 3-point field goals of the first half.

Iowa’s 75 points are the most Virginia has allowed this season.

Iowa committed a season-low four turnovers, tying the third fewest total in a single-game in the Fran McCaffery era. The four turnovers are the fewest by a Hawkeye team since three turnovers versus Temple on March 18, 2016 in the NCAA Tournament.

Iowa scored 44 first-half points, the most points Virginia has allowed in the first half at home in 13 years under head coach Tony Bennett.

Iowa made 10 3-pointers, marking the fourth time this season and third time in four contests that the Hawkeyes made 10 or more triples in a game.

The Hawkeyes had a 15-0 scoring run in the first half. Iowa has had scoring runs of 10-0 or more a combined 10 times in seven games.

Iowa improved to 3-1 all-time against Virginia and 2-0 in games played in Charlottesville.

Iowa (7-0) will play at No. 2 Purdue in the Big Ten Conference opener on Friday. Tipoff is scheduled for 8 p.m. (CT) at Mackey Arena in West Lafayette, Indiana. 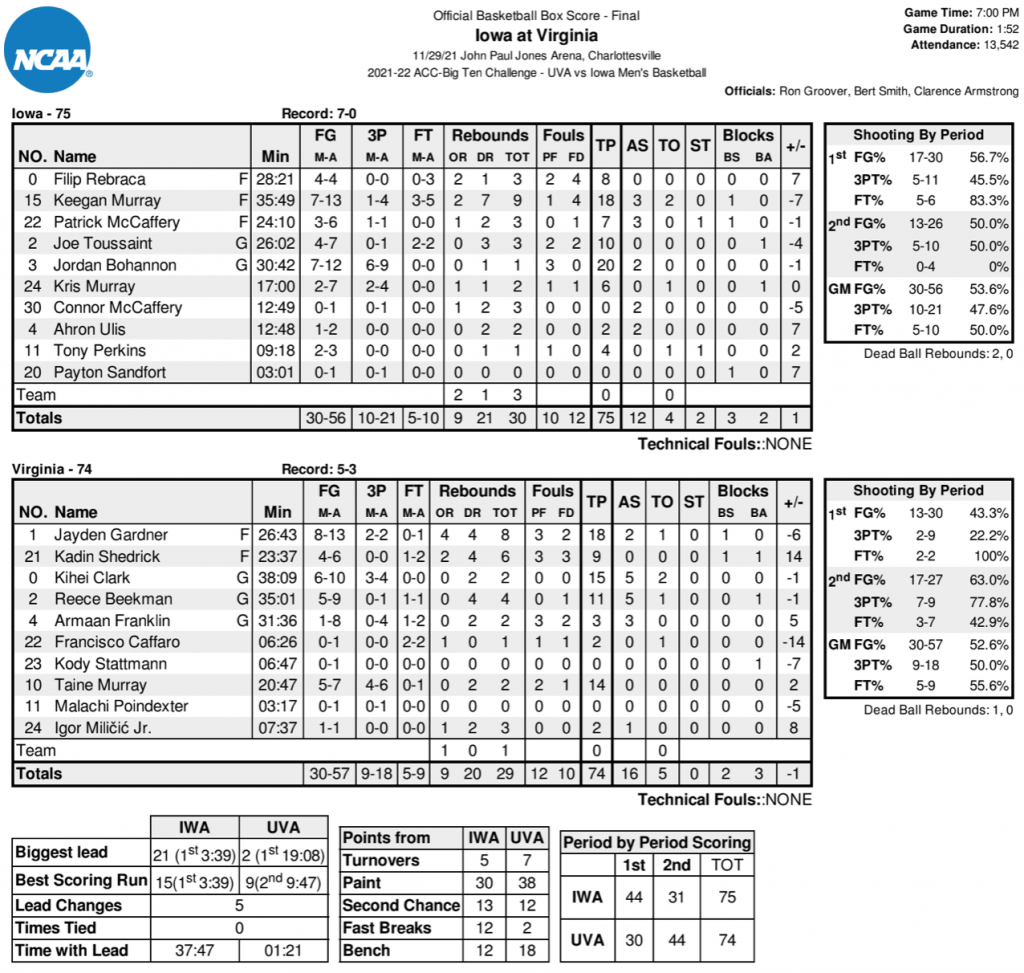