This news story was published on December 1, 2020.
Advertise on NIT • Subscribe to NIT 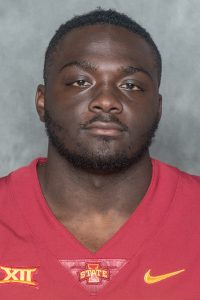 The Woodstock, Ga., native was sensational in Iowa State’s 23-20 victory at No. 20 Texas on Friday, registering career highs in tackles (five) and sacks (2.0).

His two sacks were crucial. His first sack was on third down and halted a Texas drive at midfield.

Bankston’s second sack was even bigger. It occurred with Iowa State clinging to a 23-20 lead and Texas in possession with its final drive.

The Longhorns drove down to the ISU 36 and had 3rd-and-10 with :09 seconds left in the contest. With one final play from scrimmage, Bankston busted up the middle and sacked Sam Ehlinger for a four-yard loss. It forced UT to use its final timeout with :04 seconds left.

Bankston’s sack pushed back the potential game-tying field goal attempt to 58 yards, as the kick hooked left and barely missed as time expired.

The win gave Iowa State its school-record seventh conference victory and clinched at least a share of the Big 12 regular-season title.

Iowa State enters its final-regular season game on Saturday vs. West Virginia ranked No. 12 nationally in the Associated Press poll.